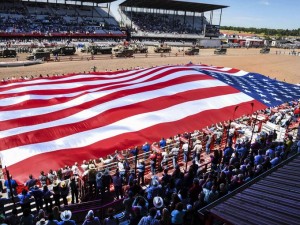 “I think that the core problem we need to address is that when people think of veterans, they don’t think of women,” said Allison Jaslow, chief of staff at Iraq and Afghanistan Veterans of America. “Until we break through that wall, we’re still going to have a challenge.” | Military Times >>

American military advisers have begun working with Iraqi army battalions in forward positions, U.S. officials said, as the campaign against the Islamic State enters a new, more risky phase. The first mission began on July 20, when a small team of combat engineers was tasked with helping an Iraqi engineer battalion establish security around a temporary bridge constructed over the Tigris River. | The Washington Post >>

The advise-and-assist mission for U.S. troops in Iraq is expanding after a small team of American forces deployed for the first time to work alongside an Iraqi battalion and help install a bridge over the Tigris River south of Mosul, U.S. defense officials said. | Military Times >>

“If I need to, I can bring in additional assets, and this could be reconnaissance, it could be air assets, it could even be ground assets,” Gen. Nicholson said in an interview this week. | The Wall Street Journal >>

“Such progress is critical to ensuring that ISIL, once defeated, stays defeated, so that our partners’ gains are made irreversible,” Carter said during a troop event at Fort Bragg. “For that reason, the international coalition’s stabilization and governance efforts cannot be allowed to lag behind our military progress.” Lawmakers, prior to their summer break, also expressed concern that areas U.S. forces are helping clear now would fall back into terrorist control under local forces who are not yet capable of holding land.| Washington Examiner >>

This month, researchers at Tel Aviv University released a study that found computerized training before deployment could help prevent flare-ups of post-traumatic stress disorder. The research team followed soldiers from basic training to combat and found that those who avoided potential threats presented on a computer screen were at greater risk for developing post-traumatic stress disorder. Although more tinkering and testing are needed, the students’ early prototype design has already earned awards at two recent medical device competitions. | Johns Hopkins University >>

The Army and other military branches are conducting research into how military deployment affects anger, and they are encouraging mental health treatment before deployment to mitigate the effects of anger after soldiers return, he said. “There’s a tremendous amount of research the Army’s been doing, the military’s been doing,” Fanning said. “It’s clear we have a lot of work left to do.”| US News and World Report >>

The list includes a Marine Corps captain who heads the organization responsible for the largest veterans parade in the country; a mother who left the Navy after reaching a rate of E-4 and is now a program coordinator for veterans at LaGuardia Community College; and a kid from the South Bronx who served in Vietnam, became an Air Force sergeant and now gives backs to children who grew up in similar situations through his work at New York City’s Department of Youth and Community Development, just to name a few. | City and State >>

After not wanting to leave his home upon returning to the U.S., Montijo eventually enrolled in a residential treatment program, where he found out about BraveHearts, an organization based in Illinois that uses horses to treat children and adults with mental disorders, as well as veterans who need a way to transition back into civilian life. | Wyoming Tribune Edge >>

“To have served means a lot to me. I’ve had the privilege to have helped defend our great nation,” he said. “Service members are being deployed on a continuous basis and are making a huge sacrifice. I missed being a part of that and used my poetry as a way of thanking them for their service.” | The Redstone Rocket >>