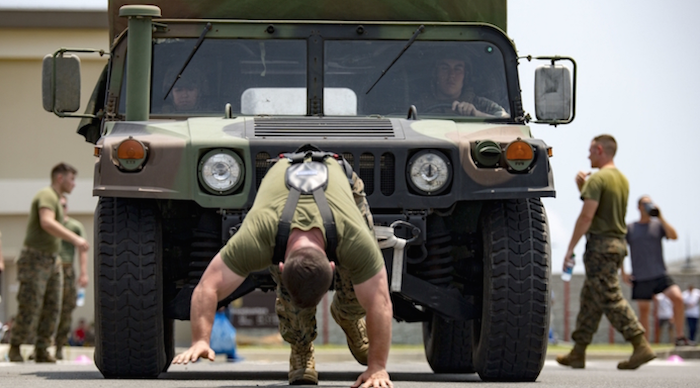 Today the House is scheduled to vote on a bill that will provide another $2 billion in funding for the program by diverting funds from other parts of the VA budget. Demand for the program has increased rapidly, almost a 50 percent increase over last year’s number of appointments. In the first six months, veterans made 8 million community care appointments through the program. | National Review >>

Frustrated by federal laws restricting their access to a drug many already rely on to help treat post-traumatic stress disorder, chronic pain and opioid addiction, veterans have become an influential lobbying force in the marijuana debate after sitting on the sidelines for years. The 2 million-member American Legion last spring got involved in a big way by launching a campaign to reduce marijuana restrictions that, it says, hurt veterans and may aggravate a suicide epidemic. | The Los Angeles Times >>

After days of closed-door negotiations about how to address the funding shortfall, members of the House Committee on Veterans’ Affairs proposed $2 billion for the Veterans Choice Program to keep it going for the next six months. The money would be stripped from other VA programs. The bill, S. 114, was scheduled for a vote Monday night on the House floor. | Stars and Stripes >>

At least 24 people were killed in the latest violence to rock Afghanistan’s capital Monday morning when a suicide bomber struck near a minibus in the southwestern neighborhood of Dehborl. Interior Ministry spokesman Najib Danesh confirmed the death toll and aid that about three dozen others were injured. | The Washington Post >>

The Pentagon will be called to account on Capitol Hill this week for its pricey plan to outfit Afghan soldiers in uniforms with a private-label forest camouflage scheme of dubious value in the desert country. Sen. Claire McCaskill, D-Mo., fired off a letter Friday to the Pentagon about the report from the Special Inspector for Afghanistan Reconstruction that found the military may have squandered $28 million by purchasing uniforms for the Afghan army without testing their effectiveness. | USA Today >>

Medecins Sans Frontiers (MSF) reopened a small medical clinic in Kunduz, Afghanistan, on Saturday, their first facility there since the American airstrikes that destroyed a hospital in 2015. “The opening of this clinic is the first step toward providing more medical assistance in Kunduz,” Silvia Dallatomasina, head of programs for MSF in Afghanistan, told Reuters. “And for us it’s an important step.” | Reuters >>

A U.S. Army sergeant stationed in Hawaii has been indicted on charges of trying to provide material support to Islamic State, allowing the case to move to a federal trial without a preliminary hearing, officials said on Saturday. Ikaika Erik Kang, 34, is being held in jail and is scheduled to appear in court in Honolulu on Monday to face charges. He was arrested on July 8. | Reuters >>

Three of the five living survivors of the USS Arizona were feted from the Pentagon to the Oval Office Friday.  President Donald Trump lauded Lauren Bruner, a fire controlman, Donald Stratton, a seaman first class, and Ken Potts, a coxswain, during a Fridayafternoon ceremony at the White House. | Military Times >>

A U.S. servicemember stationed at Osan Air Base has been charged with sexually assaulting a South Korean woman at a hotel in Seoul’s trendy Gangnam district, officials said. Police took time to identify and locate the suspect after the woman reported the assault by combing through closed-circuit television footage from the area and using DNA, officials said. | Stars and Stripes >>

Clifford and Gary Koekoek, 84-year-old twins who’ve survived fighting in the jungles of Vietnam and ended up sleeping in their car after a bank foreclosed on their California home, say they’re “grateful” for the outpouring of support they’ve received since their story went national. | Fox News >>

Borene, an attorney and former Marine officer, was recognized by the FBI’s Washington field office with the “Director’s Award for Exceptional Service in the Public Interest” for rescuing a woman who was being beaten by a man on a Washington-area highway in March. Borene works as a Booz Allen Hamilton consultant to the Intelligence Advanced Research Projects Activity (IARPA), an arm of the Office of the Director of National Intelligence. | The Star Tribune >>

Kionte Storey is on a journey to change lives after his life was forever changed seven years ago. The Marine veteran was serving in Afghanistan when he lost his right leg below the knee to an improvised explosive device. He says he can handle the physical adjustment pretty well, but “it’s more of a mental struggle. That’s really the hardest battle of all,” he says. | NBC San Diego >>