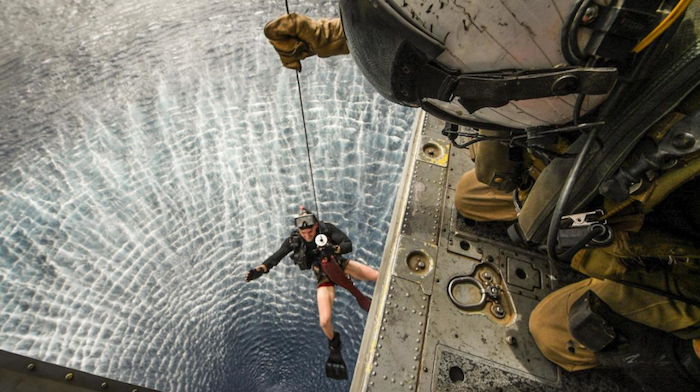 The legislation was introduced Thursday morning by Senate Veterans’ Affairs Committee Chairman Johnny Isakson, R-Ga., and ranking member Jon Tester, D-Mont. It mirrors legislation advanced by the House Veterans’ Affairs Committee this week and is expected to easily pass on the House floor next week. “We have worked closely with our partners in the veterans community and with our colleagues in the House to ensure this legislation makes the necessary changes to improve the G.I. Bill and helps veterans succeed in their desired career field,” Isakson said in a statement. | Military Times >>

And yet veterans might indeed have an edge in elections, even if there are fewer of them, according to two recent studies. Monika McDermott and Costas Panagopoulos showed that, while conditioned by party, people use candidates’ service as a cue about defense competence and interventionism that leads to higher support for some voters. | Washington Post >>

9/11 was the best of the true spirit of America. Our Pearl Harbor. Ordinary people – welders, doctors, firefighters, fast food workers – all chipping in to hand out water, help the traumatized, and dig for the dead. Ordinary citizens doing extraordinary things in the face of unprecedented circumstances. That’s also what happened in 1940 in Dunkirk – and why the groundbreaking, eardrum-pressing film by Christopher Nolan that bears the same name is so important – especially right now. At Dunkirk, thousands of courageous civilians, stood together, with hundreds of thousands of troops, to sacrifice their own future to change a history they might not live to see. |  Variety >>

Afghanistan may be known in America only for war and for terror. But as those watching the nation closely know, the teen robotics competitors winning the world’s attention illustrate a competing reality: that of a country whose young people are battling for their future against nearly every obstacle. A generation that is committed to pushing its countrymen toward better governance, a stronger economy, a free media and politics that work, even if the pull of past wars proves difficult to shake in a tough neighborhood filled with homegrown warlords and the formidable nations of Pakistan and Iran. | CNN >>

Afghan pilots will begin training on U.S. UH-60 A model Black Hawk helicopters sometime in early October. The Black Hawk training aircraft are expected to arrive in Afghanistan sometime shortly after October 1, and training will start soon after that, Capt. William Salvin, a spokesperson for Operation Resolute Support, recently told Military Times. In total, the U.S. plans to procure 159 Black Hawks to the Afghan air force, a defense official previously told Military Times. However, that plan is hinged upon Congress approving aid for the program every year. At the tune of $814 million, the U.S. plans to replace Afghanistan’s aging Mi-17 Russian transport helicopters as part of a NATO-supported recapitalization program to help bolster Afghanistan’s fledgling fleet. | Military Times >>

The spokesman for Turkeys’ president says the government had no role in the publication by the Turkish state-run news agency of a map showing U.S. military posts in Syria. The U.S. military said it had raised concerns with Ankara after Anadolu Agency published a map showing 10 locations where it says U.S. troops are located the posts span a stretch of northern Syria controlled by Syrian Kurdish forces that the U.S. supports but that Turkey considers a terrorist group. Spokesman Ibrahim Kalin said on Thursday the news article that contained the map was based on the agency’s “own news gathering network,” insisting that the government had not given “the information or directed the agency.”Kalin says Turkey has no “thought or intention that would endanger the lives of our allies’ soldiers.” | The Washington Post >>

Starting later this year, all honorably discharged veterans, no matter their branch of service, will be eligible to shop tax-free online at the Army & Air Force Exchange Service with the same discounts they enjoyed on base while in the military. It’s the latest way in which the organization is trying to keep its customers as the armed forces shrink and airmen and soldiers buy more for delivery. Adding 13 million potential new customers will give extra ammunition to the group that runs the stores on U.S. Army and Air Force bases worldwide as it fights Amazon and other retailers for veterans’ online shopping dollars. | US News >>

Petty Officer 3rd Class Peter Mims, a gas turbine systems technician on the USS Shiloh, was believed to have gone missing on June 8 while the Shiloh was conducting routine operations 180 miles east of Okinawa, Japan. His disappearance prompted a search involving both American and Japanese ships scouring 5,500 square miles of the Philippine Sea over a span of 50 hours. Mims had, in fact, never left the ship and was eventually found by his shipmates hiding in an engineering space, officials said. It’s not clear why he hid or how long he was planning on hiding. | CNN >>

When Tom Brown, the co-founder of the National Veterans Wheelchair Games, talks about the event, in which hundreds of paralyzed veterans gather in a different U.S. city each year to participate in adaptive sports, he sees it as “a great testimony to the human spirit.” As the Games transpired in Cincinnati’s Duke Energy Convention Center this week, exactly that was apparent. Nearly 600 veterans, thousands of volunteers, and others from the area gathered at the Games this week to celebrate the fact that even if someone – yes, a veteran, but also a civilian – has a physical disability, it does not make them any less capable. | USA Today  >>

Yes, the formerly chubby former Marine dropped some serious weight and is now a slim, rangy 145 pounds. He trains with the famed 10th Planet Jiu-Jitsu at their San Diego facility and his most recent fight was under the bright lights of Madison Square Garden, where he defeated fellow Marine Corps vet Jeremy Mahon at World Series Of Fighting 34. | CBS Radio >>

It was the first time the 70-year-old from Monroeville, Alabama, had been in the cockpit of a Cobra since March 1972 at the tail end of his service in the U.S. Army, which began in May 1971 as a first lieutenant. “It’s beautiful,” he said of the helicopter, which the park commission has maintained for the past dozen years. | Army Times >>