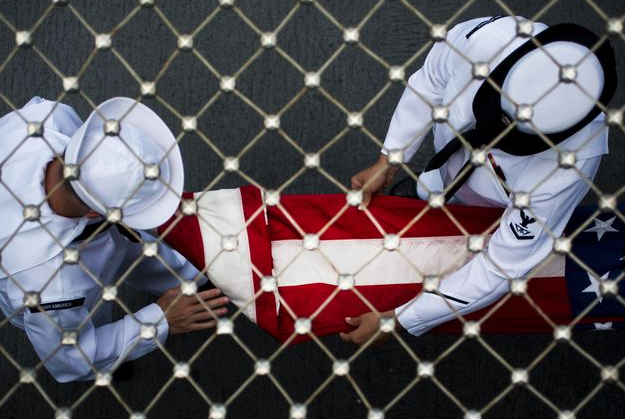 The House Veterans Affairs Committee has a new ranking member after longtime Democratic Rep. Corinne Brown of Florida was forced to relinquish the leadership position after being charged in a criminal investigation.
Rep. Mark Takano of California said in a brief statement that he was “humbled to assume the role” of acting ranking member. | Military.com >>

Military and Veterans Affairs officials are still years away from fully sharing patient health records, even almost after two decades of work and hundreds of millions in funding, according to a new report from the Government Accountability Office released Wednesday. | Military Times >>

The United States Department of Defense has acknowledged that it has a problem with suicide. Today, it’s one of the leading causes of death in the military — and that’s without including suicides among veterans. For generations, though, the military enjoyed a remarkably low suicide rate — lower than that of the general population — nobody knows why. | Five Thirty Eight >>

Iraqi government forces advancing on the Islamic State-held city of Mosul retook a village from IS on Tuesday and linked up along the Tigris river with army units pushing from a separate direction, Defence Minister Khalid al-Obeidi said. | Reuters >>

“The (counterterrorism) drone attacks that were carried out by foreign forces in Nangarhar have had a huge positive impact on the security situation in this province,” said provincial government spokesman Attaullah Khogyani. “So we hope that foreign forces expand their efforts here.” | Stars and Stripes >>

Six civilians and two policemen were killed when the bomber rammed his explosives-laden car into the checkpoint in the Shiite-dominated northeastern al-Rashidiya district, a police officer said. Up to 23 other people were wounded, he added. A medical official confirmed the casualties. Both officials spoke on condition of anonymity as they are not authorized to talk to the media. | The Associated Press >>

Spider silk is one of nature’s toughest substances, similar in strength to the Kevlar plastic found in bulletproof vests but much more flexible. Kraig Biocraft, a company out of Ann Arbor, Michigan, genetically altered silkworms to produce a fiber that’s similar to pure spider silk. Today, they announced an Army contract to test this so-called Dragon Silk for possible use in body armor. | Defense One >>

The U.S. military has released photos of Iranian boats that approached two Navy warships Monday as they transited through the Strait of Hormuz with a special passenger aboard: Gen. Joe Votel, the head of U.S. Central Command, which oversees all U.S. forces in the Middle East. | The Wall Street Journal >>

U.S. Capitol Police stopped a group of color guard Marines who were carrying their ceremonial drill rifles, according to The Hill. The Marines, who were on their way to a ceremony on Capitol Hill, were delayed at least 20 minutes on Monday while Capitol Police checked the two inoperable rifles, The Hill reported. | Marine Corps Times >>

U.S. Army veteran Mitch Sullivan has found participating in a gardening project at the Colmery-O’Neil VA Medical Center in Topeka to be a therapeutic experience. “For me, I can say it’s very therapeutic. I like watching stuff grow,” Sullivan said. “I feel like I’m raising little children.” | The Topeka Capital-Journal >>

Imagine a drive down a lonely highway, nothing but blue waters surrounding you. Now who do you imagine taking the drive with? For Robert Kugler, that drive was with his chocolate lab Bella. Their journey has turned into a cross country trip of a lifetime. | WOWT >>

“A lot of work needs to be done to raise awareness,” Wills said. “Many civilians don’t understand that you just can’t leave a military lifestyle and fit right in to civilian life. You’ve been trained to suck it up in the military, it’s like wearing a box of emotions on your shoulder that you can’t touch for years and then there is a transition.” | MLive >>