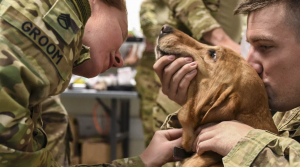 “Science has recognized there are certain carcinogens when people are exposed to them,” Biden said in an interview with Judy Woodruff last week. “Depending on the quantities and the amount in the water and the air, [they] can have a carcinogenic impact on the body.” | PBS >>

“It’s kind of cool also to be in an exoskeleton, a robot suit. Everybody sees Iron Man on the movies and nobody dreams that they’re going to be able to put on a suit like that,” Turner said. Physical therapists completed a training program to use the device. | News4 >>

The practice, known as “loan-churning,” was highlighted last year, when Ginnie Mae – a government-owned entity that aims to make mortgages more affordable – announced an investigation into lenders improperly pressuring veterans to repeatedly refinance loans with little or no benefit.Loan-churning happens more often with VA mortgages than loans insured by other agencies, said Michael Bright, vice president of Ginnie Mae. | Stars and Stripes >>

When Ashraf Ghani, a former academic and World Bank technocrat, took office as the president of Afghanistan in 2014, he promised to change the way the country was governed by putting a new generation of Afghans into leadership positions. The long war with the Taliban was still raging. A disputed election had almost fractured the country. The treasury was drained. | The New York Times >>

“Shell sold its stake in West Qurna 1 to Itochu and the oil ministry approved it. We met with Itochu and discussed the required financial investments and operations at the field,” Ihsan Abdul Jabbar, the head of state-run BOC, told Reuters in an interview. The West Qurna 1 oilfield, operated by Exxon Mobile, currently produces around 405,000 barrels per day. | Reuters >>

Authorities say a soldier from South Carolina who had been stationed in Texas has been killed in Iraq. The Pentagon said in a news release that 24-year-old Spc. Javion Shavonte Sullivan of Fort Mill died Monday in a noncombat-related incident. The Defense Department said Sullivan was assigned to the 16th Signal Company, 11th Theater Tactical Signal Brigade at Fort Hood, Texas. | US News and World Report >>

“This has a real impact on national security,” said Daniel Bornstein, a researcher who led the study. The regional distinction also suggests that government policy can influence fitness, and the South may be falling behind the rest of the country. “Some of the greatest public health achievements have come as the result of state-level policy change,” the study found.  | USA Today >>

As the official tasked with managing the construction of the ship, Metcalf said he didn’t know the specific power level or capability of the laser, which is a next-generation successor to LaWS developed by the Office of Naval Research. | Defense News >>

In announcing the presentation, home builder Jordan Wheatley told the audience, “Last week, our Homes for Heroes board made a unanimous vote to build a home for Michael Vasquez – he served in the Marines in Iraq.” Wheatley shared some of Vasquez’s story – noting that in late 2008, the Marine was ordered to Afghanistan to serve as an infantry team leader. In July 2009, his convoy came under attack. | Lubbock Online >>

When Roman Baca returned home from active duty in Iraq in 2007, he found himself having a tough time transitioning to civilian life. “I remember a couple of instances where I was mean and angry and depressed,” says Baca. “My wife sat me down and said, ‘You are not the same guy I knew before.’ ” She suggested Baca return to his roots in dance. | Dance Magazine >>

War-wounded military personnel have pedaled their way across the Seven Mile Bridge and other parts of the Florida Keys Overseas Highway as a facet of the weekend’s Florida Keys Soldier Ride. Some 44 injured soldiers and their supporters joined the activity Friday, staged by the Wounded Warrior Project, to provide inspiration and raise funds for injured comrades recovering in American military hospitals. | US News and World Report >>