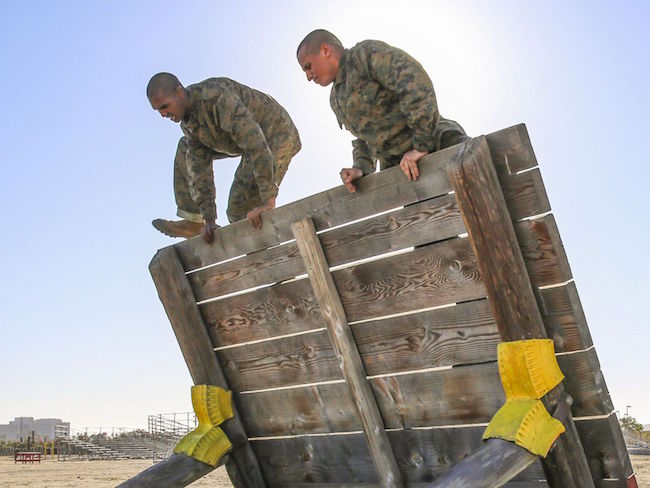 Marine Corps recruits climb over a wall at Marine Corps Recruit Depot San Diego. Drill instructors monitored the recruits’ progress to make sure they were maneuvering over the obstacle correctly. | Military Times >>

VA: Veterans suicide must be a top priority
The Veterans Affairs Department is ratcheting up efforts to address the high rate of suicide among veterans, bringing in mental health experts, advocates and affected families to formulate an “action plan” in the coming months to reduce these preventable deaths. | Military Times >>

Bill requires women to sign up for draft
Two House Republicans introduced a bill Thursday requiring eligible women in the United States to sign up for the military draft, just days after it was recommended by the Marine Corps and Army. | Stars and Stripes >>

Congress outraged over hepatitis C treatment VA can’t afford
Congress is looking into why veterans are being denied a cure for a deadly form of hepatitis. In a CBS News investigation, we told you the cure was developed by a doctor working for the Department of Veterans Affairs. | CBS News >>

Afghanistan expects to restart peace talks with the Taliban within six months, chief executive Abdullah Abdullah said on Thursday, pinning hopes on factions within the Islamist militant group he said might be ready to give up violence. | Reuters >>

Britain’s Prince Harry narrowly escaped a Taliban rocket attack in Afghanistan, a new book claims. The royal soldier was serving as an air controller in Helmand province in 2008 when his base came under fire. | New York Daily News >>

Two airmen killed in Afghanistan in December have been posthumously awarded the Bronze Star Medal with “V”, the Air National Guard announced Thursday. Staff Sgt. Louis M. Bonacasa and Tech Sgt. Joseph G. Lemm, both with the 105th Security Forces Squadron at Stewart Air National Guard Base, New York, have been honored with the nation’s fourth highest military decoration for valor “for saving the lives of other airmen at the cost of their own,” the Guard said. | Air Force times >>

A spokesman for Iraq’s embassy in Washington told Military Times that neither the ambassador nor his staff could provide “informed responses” to questions seeking clarity on Baghdad’s willingness to host more U.S. troops. “I can try to request clarification from Baghdad,” said Ali Al-Mawlawi, the spokesman, “but I can’t guarantee that we’d get an on-the-record response.” | Military Times >>

Iraqi officials say a string of roadside bombs and a shooting have left nine people dead and 33 wounded across the capital. Thursday’s violence comes one day after Iraqi authorities announced that construction had begun on a wall and trench around Baghdad to prevent militants and explosive-laden cars from entering the capital, where bombings and suicide attacks have been commonplace for over a decade. | AP >>

Landstuhl Regional Medical Center, Germany, has delayed its plan to ban tobacco campus-wide. The new date for the ban is Feb. 15. The move is in step with a broader Pentagon effort to stamp out tobacco from medical facilities by May and curb use of nicotine in general. | Army Times >>

The Navy is investigating a rise in health issues among pilots of its fleet of F/A-18 and EA-18G fighter jets, the chairman of a House Armed Services Committee subpanel said Thursday. “We’ve been informed that the Navy has organized a Physiological Episode Team, to investigate and determine the causes of these physiological episodes in aviators,” Rep. Michael Turner (R-Ohio), chairman of the Subcommittee on Tactical Air and Land Forces, said at a hearing Thursday. | The Hill >>

Maximilian Uriarte started drawing a comic strip six years ago, when he was a lance corporal stationed in California. The comic strip, which he called “Terminal Lance,” drew on his experience to make light of the silly, tedious and coarse aspects of daily life in the Marine Corps. | Wall Street Journal >>

Homeless veterans get a huge donation to help them get back on their feet. The Louisville Chapter of the Combat Veterans Motorcycle Association dropped off transitional housing kits today. The VA Healthcare Center in Shively works to put homeless veterans into apartments. | WDRB >>

Rash turned to the Missouri Career Center and that’s when he met Alan Smith, the center’s veteran’s representative and a veteran himself. He told him about the state’s “show me heroes on the job training program.” “So If an employer chooses to hire a recently separated veteran, the Show-Me Heroes on the job training program will/ we will reimburse that employer half of their wages for a specified training period”, says Smith. | KOLR 10 >>

Democratic presidential candidate Bernie Sanders offered on Wednesday night as close to an apology as he could when pressed on why he — as the former chairman of the Senate Veterans Affairs Committee — waited so long to act on the burgeoning wait list scandal at the VA. | CNN >>

A Rhode Island veterans’ cemetery allows dog walking, much to the dismay of the deceased’s families. A veterans’ cemetery in Exeter, Rhode Island, allows people to walk their dogs among the gravestones much to the dismay of many who find it sacrilegious. According to The Associated Press, the state has received six complaints in the past year from visitors to the cemetery who found fault with dogs roaming around the 265-acre property. | Task & Purpose >>

Part of the original GI Bill of 1944, VA home loans — mortgage loans guaranteed by the U.S. Department of Veterans Affairs (VA) — have soared since the housing crash. During a time of tight credit and tough lending, this long-cherished program backed a record 631,151 loans in fiscal year 2015. VA loans aren’t just grabbing market share — they’re snagging headlines, too, from talk of their industry-low interest rates to their surprising safety. | Fox Business >>