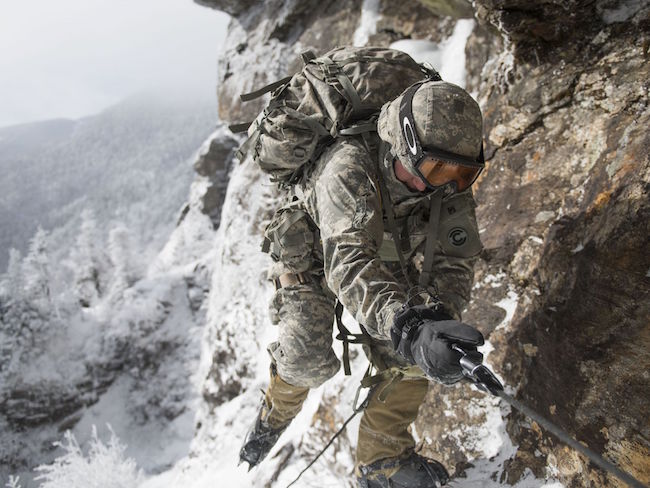 The Pentagon wants to make even more changes to troops’ retirement plan
The Pentagon is fending off criticism that another round of updates to the military’s retirement system would benefit older career-minded personnel at the expense of younger troops who fulfill only a short-term obligation. The proposed changes are outlined in the Defense Department’s 2017 budget request, revealed Feb. 9, which urges Congress to rework several pieces of the new retirement plan that was passed into law last year and is slated to take effect in January 2018. | Military Times >>

The Veterans Who Aren’t
Reservists today serve virtually everywhere, alongside their “active component” comrades.  In battle, the performance of these trained and courageous citizen-warriors of all ranks, specialties, and any other category has been recognized as indistinguishable from the “regulars.”  They ask to serve; they deserve equity for that service.  Inequity is written into law; most of the legislation governing the military was written before and during the Cold War. | The Hill >>

Exclusive: Whistleblowers say Veterans Choice used to slash budget deficit and care
Veterans all over the country have complained about long wait times, mismanaged appointments and little coordination of care in the Choice program. In Cincinnati, a new problem has emerged: Whistleblowers say the local VA intentionally reduced services in some areas like neurosurgery and orthopedics, actually forcing veterans into the Choice program because it makes the local hospital’s budget look better. | KMTV >>

A suicide bomber on a motorcycle killed 14 people and wounded another 11 at a clinic in Parwan, north of the Afghan capital Kabul on Monday, officials said. The Taliban claimed responsibility for the attack, which it said was aimed at a local police commander. It said the civilian casualties were caused when police opened fire. | Reuters >>

Afghan government forces have pulled out of a second district in Helmand, officials said on Monday, leaving the Taliban in control of most of the northern part of the province after troops withdrew from Musa Qala district last week. | Reuters >>

Complex multi-sided fighting raged on in Syria last week, particularly in the northwestern Aleppo province, while in Iraq, Sunni Arab gunmen revolted against Islamic State fighters in the city of Fallujah. | UPI >>

The U.N. mission in Iraq says bombs planted by the Islamic State group are hindering the return of displaced families to the newly liberated city of Ramadi. It’s been two months since Iraqi forces, aided by U.S.-led coalition airstrikes and Sunni fighters took back Ramadi from the extremists. | Associated Press >>

When it comes to many of the interlocking conflicts of the Middle East, the Kurds seem to be a kind of glue. For decades, millions of Kurds have lived as part of stateless ethnic minorities across a vast expanse of the region, from Iran in the east to Turkey in the west. To varying degrees, they were marginalized, oppressed and under-represented. | Washington Post >>

“We’re going to keep the B-52 around. It provides some missions for us that are hard to replicate, primarily the range and payload the airplane provides,” Lt. Gen. James “Mike” Holmes, the deputy chief of staff for strategic plans and requirements, said Feb. 18. That’s why the service is focusing on a modernization effort to make sure the B-52’s stay flying for years to come. Here’s what you need to know: | Air Force Times >>

“Raise your hand if you have ever determined your location on the planet using the stars,” Lt. Daniel Stayton tells his class at the U.S. Naval Academy. A young officer halfheartedly puts up her hand. Another wavers. The rest of the class of 20 midshipmen sits stone-faced. This is the challenge facing the U.S. Navy as it tries to bring back celestial navigation. | NPR >>

Dorothy Hollingsworth was just 7 when her brother Tom left the family farm in Indiana to join the Army a few months before the United States entered World War II. She never saw him again. Now, more than 70 years after Pfc. Thomas E. Davis was killed in the war’s final battle, a tangible reminder of her beloved sibling has been found on the Pacific island of Saipan — one of his Army dog tags. | Associated Press >>

Former Army Sgt. Anthony Sarpy said a total of four tours of infantry duty in Iraq and Afghanistan exposed him and others to horrific images of war. “I basically wrote a song, “The Realities of Combat,” about vets who’ve been in combat and experienced traumatic things, and when they come home they’re unable to get over those experiences,” said the 31-year-old Waukegan resident. | Lake County News-Sun >>

Last August, Cooper entered Warrior Wellness, an equine-assisted therapy program at the U.S. Air Force Academy’s Equestrian Center. The PTSD hasn’t disappeared, but caring for horses and riding and taking part in therapeutic exercises with the animals has given him more control and helped to calm the anxiety that dominated his life for years. | Denver Post >>

Feherty’s Troops First Foundation is a non-profit organization that assists warriors who were injured in Iraq and Afghanistan as well as their families. In 2008, Rick Kell and David Feherty co-founded Feherty’s Troops First Foundation. Kell observed that they were gaps in the programs currently offered to veterans. He wanted to offer those programs, without duplicating the services that were already available elsewhere. | WMAR ABC 2 >>

Department of Veterans Affairs leaders have shuffled nearly 100 hospital administrators to three or more states each in the last eight years, often to deal with underperforming directors whom they could not fire, according to a Daily Caller News Foundation analysis. | The Daily Caller >>

A pair of senior Veterans Affairs executives at the center of a months-long scandal over the department’s internal promotion system and relocation expenses will keep their regional director jobs, after two failed attempts from VA officials to reassign them elsewhere. | Military Times >>

In the wake of a scathing report about failures in the Department of Veterans Affairs suicide hotline, Sen. Mark Kirk is demanding that the VA fire its director of mental health. “The horrific revelations contained in the recently released VA (Office of the Inspector General) investigative report include repeated instances of the VA ignoring veterans’ needs for suicide assistance,” Kirk wrote in a letter to VA Secretary Robert McDonald. | CNN >>