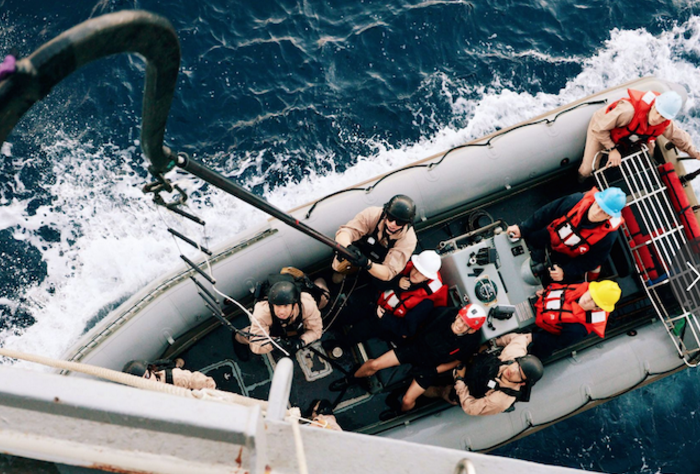 Reducing Mental Health Risk for Kids in Military Families
Rather than simply reacting to issues as they arise, many experts are now focusing on ways to improve kids’ resilience and prevent or address mental health challenges in the early-going. And in a military culture that prizes all-for-one toughness, a family-centered, strength-based approach that emphasizes education and skills building is proving to be an effective prevention strategy, according to research published last month in the Journal of the American Academy of Child and Adolescent Psychiatry on the so-called FOCUS program – or Families OverComing Under Stress preventive intervention. | U.S. News & World Report >>

Study: Military falls short in treating new cases of war-related stress
The U.S. military is struggling to provide adequate therapy sessions for thousands of active-duty troops suffering from post-traumatic stress disorder and depression, a massive study released Thursday concludes. The RAND Corp. study of 40,000 cases, the largest ever, found that only a third of troops with PTSD and less than a quarter who are clinically depressed receive the minimum number of therapy sessions after being diagnosed. | USA Today >>

All candidates say they would help veterans. Who actually has a plan?
Promising to take care of military veterans is an easy win for presidential candidates. All of them agree on the need to overhaul the scandal-riddled U.S. Department of Veterans Affairs and end delays in accessing the health care that veterans were promised. This is especially a key issue in the South Carolina primary, where veterans make up 11 percent of the adult population. | McClatchy DC >>

Four people were killed during a special-forces raid at a charity-run hospital in Afghanistan on Wednesday night, according to government and army officials. The deadly incident occurred in the Day Mirdad district of Wardak province. | NBC News >>

The Afghan military is expected to field its first specialized surveillance drones as soon as March, a U.S. commander in Kabul said on Thursday, as the Asian nation slowly expands its own air force. The boost in military hardware comes as Afghan security forces, fighting largely alone since the withdrawal of most international forces in 2014, have struggled for months to hold back a Taliban insurgency. | Reuters >>

Iraq has sentenced 40 men to death over the killing of up to 1,700 military recruits at a former US base in 2014. The Camp Speicher massacre was carried out by fighters from the so-called Islamic State (IS) group as they seized territory across northern Iraq. | BBC News >>

The Iraqi government has decided to cut the number of state-financed paramilitary forces due to a shortage of funds as the international oil price declines, a spokesman for a leading predominantly Shiite militia group said Thursday. | New York Times >>
U.S. troops in Iraq are setting up a train-advise-and-assist team at a forward operating base near the Islamic State group’s front lines outside of Mosul, not far from the site of recent chemical weapons attacks. | Military Times >>

Two years ago, the Navy announced that it would test its futuristic rail gun in 2016 aboard a Joint High Speed Vessel, a new transport ship for which top admirals envision a variety of missions. The test would mark the first time the electromagnetic weapon — capable of firing rounds up to Mach 7 — would be fired at sea, “symbolizing a significant advance in naval combat,” Navy officials said. | Washington Post >>

The Army is chipping away at a backlog of nearly 14,000 soldiers who have not completed the schools they need to be considered for promotion. About 2,280 soldiers from that group went to school during the first quarter of fiscal 2016, or October through December, said Command Sgt. Maj. David Davenport, the senior enlisted soldier for Training and Doctrine Command. That leaves about 12,000 to go. | Army Times >>

Hurried passersby might miss one of the newest gyms downtown, Full Circle Nutrition off Washington Street. Inside, it is hard to miss the “drill sergeant,” Kyle Ingle, as he barks bits of motivation. “Three, two, one. You guys are beasts!” he said, clocking workouts for a fit camp class. | WNDU 16 >>

For physically disabled vets, assimilating back to civilian life isn’t easy, especially when all they really want to do is get back to doing the things they love – like hiking to reach this incredible view, for instance. | DoD News >>

Ochs is the driver for Soldier Fortune Black Ops, one of 16 trucks scheduled to complete in Monster Jam on Saturday at EverBank Field. It’s a new truck this year and this is just its sixth competition. Ochs is a new driver as well, but one who is well suited to drive a military-themed truck. He said he was in the U.S. Army for a little over a decade, rising through the ranks to become a crew chief for Apache helicopters. | Florida Times-Union >>

Department of Veterans Affairs officials are standing by removal of their Albany medical center’s director despite an oversight board’s ruling that terminating her was too severe a punishment. Merit Systems Protection Board Administrative Law Judge Arthur Joseph two weeks ago ordered Linda Weiss’ removal cancelled. | AP >>

The Pentagon’s health care system for active-duty troops covers IVF for wounded soldiers like Matt Keil. The Department of Veterans Affairs for veterans doesn’t. By the time the Keils learned about the difference, it was too late. “We were just swallowing the fact that he was never going to go back to work,” Tracy says. “But finding out that IVF wouldn’t be covered because we agreed to retire out so quickly, that was hard, because nobody told me that.” | NPR >>