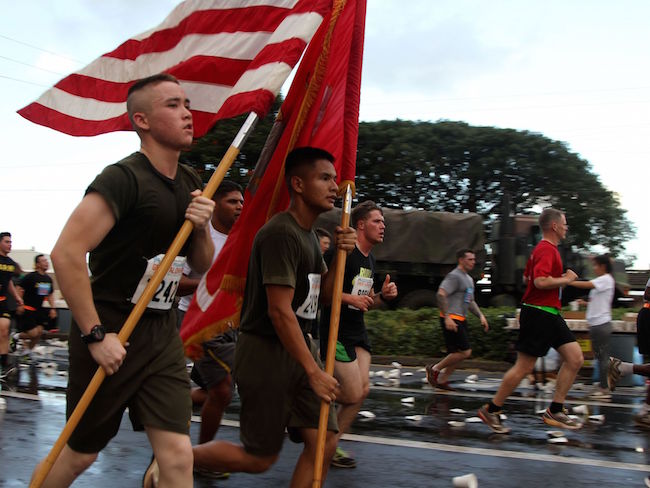 US military burn pits built on chemical weapons facilities tied to soldiers’ illness
Based on clusters of similar cases, scientific studies and expert opinions, author Joseph Hickman proposes in The Burn Pits: The Poisoning of America’s Soldiers that US service members in Iraq and Afghanistan confronted more than one unexpected enemy that followed them home. Many soldiers complain of respiratory issues relating to their burn pit exposure. But others likely developed more life-threatening conditions such as cancers, Hickman contends, because of what the burn pits were built on top of: the remnants of Saddam Hussein’s chemical weapons program. | The Guardian >>

A National Day To Honor Disabled American Veterans Is A Step Closer To Actuality
Greg Gadson and Leslie Smith, JR Martinez and Tammy Duckworth, Jason Pepper and Kirstie Ennis… Unless you are one of their family members or friends, or unless you are professional colleagues or live in the towns in which they reside, their names will have no special meaning to you. But they should. They are among the four million living disabled American veterans – four million men and women who sacrificed so much in defense of the freedoms and ideals we in America all enjoy and cherish. | Huffington Post >>

Dozens of Afghan soldiers and policemen have been killed in the southern province of Helmand since Sunday as the Taliban presses an offensive in one of its heartlands, officials said. | Reuters >>

Defense Department officials are hopeful that by the end of this year they’ll be paying for salaries of only Afghan soldiers who actually exist. In testimony before House Armed Services Committee members late last week, Pentagon officials said they hope to have in place in coming months “an integrated pay and personnel system” for Afghanistan security forces that will help U.S. forces better identify and account for thousands of individuals in the ranks. | Military Times >>

The Afghan security forces on Tuesday cleared militants from a restive district on the outskirts of Pul-e-Khumri, capital of Baghlan province. The move will help government technical teams repair electricity towers that were destroyed by militants earlier, Xinhua news agency quoted authorities as saying. | Business Standard >>

Three American contractors who were kidnapped last month by an armed group in Baghdad have been freed, two Iraqi security officials and a U.S. official said Tuesday. Elements of the Iraqi intelligence apparatus freed the three, the officials said. Further details about their rescue weren’t immediately available. | CNN >>

The UN is increasingly concerned about 559 Sunni Arab Iraqis stuck in no-man’s land between Islamic State (IS) militants and Kurdish forces. The UN High Commissioner for Human Rights (UNHCR) said they had spent three months living in deteriorating conditions near the town of Sinjar. | BBC News >>

At a time when U.S. special operations are devising plans for the mission of accepting women into the male domains of SEALs, Green Berets and Army Rangers, the terrorist-fighting community is facing a looming readiness problem. | Washington Times >>

Workers at a logistics center in Elizabeth City will paint 16 search-and-rescue helicopters and airplanes in color schemes from the past as part of the Coast Guard’s celebration of 100 years of aviation. | Associated Press >>

Applications are being accepted for one of the most demanding and competitive education opportunities available to Army officers — the School of Advanced Military Studies Strategic Planning and Policy Program, or ASP3. | Army Times >>

Writer and director Henry Hughes served in the 173rd Airborne Brigade for five years, including two deployments in Afghanistan. His friendship with his Afghan-American interpreter, Ayman Aziz, inspired this film, which can be seen in theaters or on-demand. | Defense One >>

Marine Corps veteran Tim Fallon, 28, heads up Pico Mountain on a mission. He was blinded by an improvised explosive device in Afghanistan in 2010 and feared that he would never ski again. But now he has a few good men — two volunteer ski guides — and his wife, Sarah, to serve as his personal radar on the slopes. | Boston Globe >>

In honor of the 161 women killed in Iraq and Afghanistan, Capt. Maggie Seymour will run a 161 miles over three days. “If it’s something you feel passionate about, your body can do it,” according to Marine Corps Capt. Maggie Seymour. While that’s easy for an experienced runner to say, 161 is a daunting number of miles to run. | Task & Purpose >>

The wife of a Navy retiree is among those being mentioned as a possible nominee for the Supreme Court in the wake of the death of Justice Antonin Scalia. Patricia Millett has been a judge on the U.S. Court of Appeals, District of Columbia Circuit, since Dec. 10, 2013. | Military Times >>

A special local court for offenders who are military veterans has proven so successful the Department of Justice selected it for a pilot program to help improve veterans’ courts nationwide. There are now more than 200 veterans courts around the nation, with hundreds more planned. | The Tampa Tribune >>

The Senate Health and Human Services Committee is mulling legislation that would allow post-traumatic stress disorder to be treated with medical marijuana. Democratic Sen. Stephen Archambault, of Smithfield, introduced the legislation. | Associated Press >>