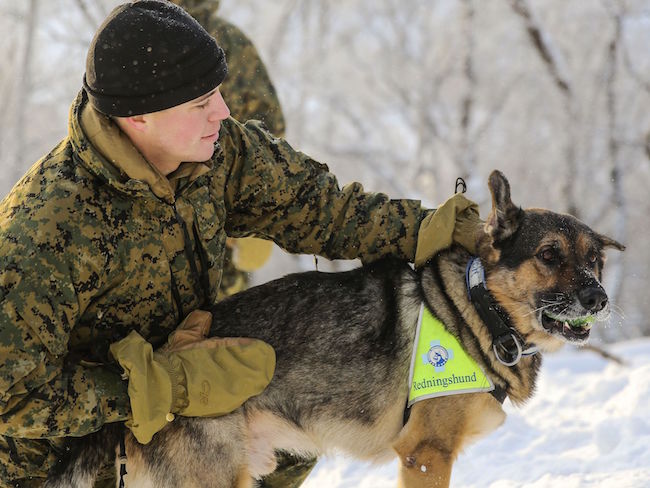 Bill introduced to end the draft
A bipartisan group of four congressmen introduced a bill Thursday that would abolish the Selective Service System, more commonly known as the draft. “Maintaining the Selective Service simply makes no sense,” Rep. Mike Coffman (R-Colo.), a former Marine, said in a written statement. “In 1973, the last draftee entered the Army and since then, despite the first Gulf War and subsequent wars in Iraq and Afghanistan, the Pentagon has never considered reinstituting the draft. Our all-volunteer military has given us the most elite fighting force in the history of this country.” | The Hill >>

Pressure is growing on the U.S. military to do more to help Afghan forces repel the threat posed by Taliban militants, and commanders in Washington and Kabul agree that enhanced air power may be where it can make the most difference. | Reuters >>

Four Afghan policemen were killed and another seven wounded when one of their colleagues opened fire on them in the volatile southern province of Kandahar, an official said on Thursday. | Associated Press >>

Russia is ready to sell civil airliners to Iraq and keep providing it with military aid to fight Islamic State, Deputy Prime Minister Dmitry Rogozin said on Thursday, accompanied on a trip to Baghdad by the biggest Russian delegation in years. | Reuters >>

Kurdish fighters backed by Russian bombing raids have driven Syrian rebels from a former military air base near the border with Turkey, a group that monitors the war said on Thursday. | Reuters >>

Sergeant Major of the Army Dan Dailey is seeking a review of the tape test to determine whether the method is a fair measurement of a soldier’s physical fitness. | Army Times >>

U.S. Army equipment officials are working on a new lightweight, body armor system that combines a plate-carrier style vest with an armored Army Combat Shirt. The new Soldier Protection System is being designed to provide soldiers with as much as a 14-percent weight savings than the current soldier protective equipment, according to Col. Dean Hoffman IV, the head of Army’s Project Manager Soldier Protection and Individual Equipment. | Military.com >>

Military officials have stepped up their anti-hazing efforts in recent years, but haven’t tracked whether any of those changes are working, according to a new study out this week. | Military Times >>

An Iraq War veteran who self-published a graphic novel based on his popular comic strip now has a book deal. Little, Brown and Company announced Thursday that it has acquired Maximilian Uriarte’s “The White Donkey: Terminal Lance” and will release it April 19. The book is based on the satirical Terminal Lance comic strip created in 2010 by Uriarte and will feature a pair of military recruits in Iraq. | Associated Press >>

Unbeaten lightweight Jamel Herring is a former marine disciplined enough to know not to look too far ahead. Winning takes focus on the moment and on the next fight. “I’m thinking far ahead, of course,” he told FOX Sports, late last week. | Fox News >>

A UCC student and former veteran is attempting to have legislation passed to help prevent veteran suicides. Heather Gilbert, who works in Veteran’s Services at UCC, began working on the bill in response to the recent string of suicides occurring throughout Douglas County. | The Mainstream Online >>

The U.S. Department of Veterans Affairs has a new strategy to combat the number of veteran suicides, one that includes reducing the number through social engagement. Department of Veterans Affairs Secretary Robert A. McDonald and Dr. David J. Shulkin, VA’s under secretary for Health, addressed a packed audience inside the Washington Plaza Hotel in Washington, D.C., Feb. 2 during a summit on mental health entitled, Preventing Veteran Suicide: A Call to Action. | Pentagram >>

A scientific panel has concluded that the Veterans Affairs Department should stop searching for links between environmental exposures in the 1991 Persian Gulf War and veterans’ illnesses and instead focus on monitoring and treating those who have health problems related to deploying 25 years ago. | Military Times >>

An influential member of the U.S. Senate wants Veterans Affairs Secretary Bob McDonald to stay on in that role next year, no matter who becomes president. “Everything I’ve seen with Bob McDonald over the last 16 months, I’ve been very pleased with,” said Sen. Johnny Isakson, R-Ga., in an interview for C-SPAN’s “Newsmakers” taped Thursday. | Military Times >>