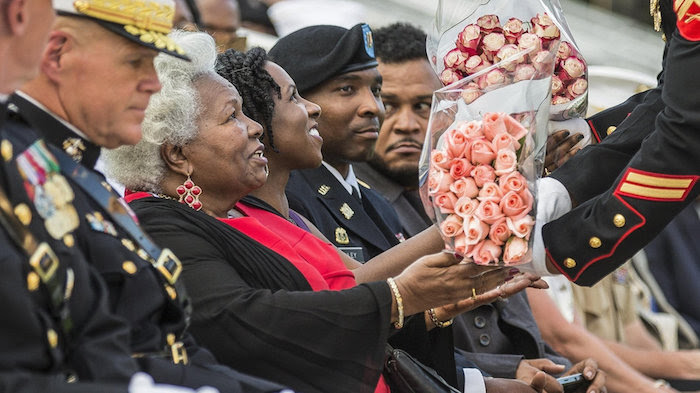 We sang that night like it was our last. “Don’t Ask Don’t Tell” had just been repealed, but open transgender service was a distant dream. In those days, Freddie’s Beach Bar was a second home for closeted soldiers and spies back from one war or another; a safe haven to catch a few short hours of freedom. The closest gay bar to the Pentagon, Freddie’s is the top karaoke joint of the military-industrial complex, and a gay Cheers where everyone knows your alias. | The Atlantic >>

Throughout its history as an independent service, The Air Force has required its aircraft to be piloted by commissioned officers – until now. On Aug. 4, four airmen in the Enlisted Pilot Initial Class completed Undergraduate Remotely Piloted Aircraft Training at Joint Base San Antonio-Randolph, Texas. Among them was Tech Sgt. Courtney, the Air Force’s first female enlisted pilot. | Task and Purpose >>

Medal of Honor recipient and fellow Purple Heart recipient Florent Groberg said, “When I get to see them, shake their hands, have a conversation with them, it’s powerful.” | WJLA >>

The U.S. is sending up to 100 additional Marines to Afghanistan to bulk up its advising force in Helmand province, the Pentagon confirmed Tuesday. The deployment, first reported by NBC News, will be filled by Marines who are already deployed to the U.S. Central Command area of operations, said Maj. Josh Jacques, a CENTCOM spokesman. | Military Times >>

The Pentagon has approved a new policy allowing military bases to shoot down private and commercial drones that are considered a threat. | The Verge >>

A German man believed to have provided logistical support to the Hamburg-based Sept. 11 hijackers has died, according to a newly-released audio message from the leader of al-Qaida. | Stars and Stripes >>

Virginia’s attorney general has created a new resource guide with information on things like taxes and education for military service members and veterans. | Military Times >>

The United States’ oldest fighting service is also the last one to get its own museum. And for its first museum display, the Army has chosen to represent its storied, 242-year history with a 25-ton curio from one of its most recent conflicts. | Task and Purpose >>

A bomb-sniffing dog trains by sniffing individual chemicals within an explosive but isn’t likely to get a whiff of a complete device until coming across the real thing. | Stars and Stripes >>

Milwaukee baseball fans were treated to a heartwarming scene on July 4 when the Brewers recognized Honor Flight veterans by giving away jerseys with the vets’ name on them during a pre-game ceremony. | Fox News >>

A group of women who come from families that fought in the American Revolution have been working for months digitizing the burial records at the Valley Center Cemetery and, in the process, have so far identified 165 veterans’ graves dating back to the Civil War. | San Diego Union Tribune >>

A local paralyzed veteran who wrote the official Wounded Warrior Creed adopted by the Marine Corps has died. Retired Army Sgt. Joseph “Joey” Smith, a career military man who also served in the Marines, died Sunday at Kindred Hospital in Greensboro, following a massive stroke he suffered in May. | Task and Purpose >>