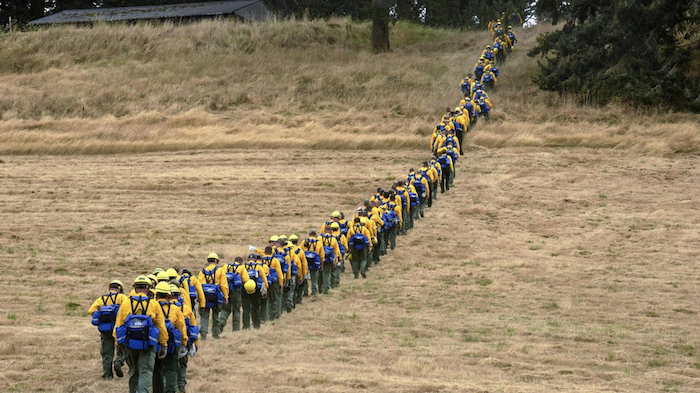 Rural areas are often bypassed under the agency’s existing guidelines for awarding grants for veterans’ homes, Shulkin told reporters after touring VA facilities and meeting with veterans in Helena. “If we don’t change the rules to make sure that being in a rural area increases the likelihood of funding, we’re not going to get to be able to help residents of Montana,” Shulkin said. | ABC News >>

Women have always served in an unofficial, volunteer capacity in our nation’s military. It wasn’t until 1948 that women achieved permanent status in all branches of the military when President Harry S. Truman signed the Women’s Armed Services Integration Act. You would think that after almost 70 years of service, women would be recognized as veterans as much as their male counterparts. Sadly, this isn’t the case. | Andy’s Insights >>

Thomas Porter, a military reservist who served in Afghanistan, said he’s encouraged that Trump appears to have listened to military commanders instead of going “with his gut.” Porter, the legislative director for Iraq and Afghanistan Veterans of America, said he’s waiting to see how steady the administration will be in this new strategy and how returning veterans will be treated. | The Associated Press >>

U.S. Defense Secretary Jim Mattis, speaking just before arriving in Iraq on Tuesday, said the fight against IS was far from over despite recent successes by the Western-backed government. The Sunni Muslim jihadists remain in control of territory in western Iraq and eastern Syria. | Reuters >>

President Donald Trump’s speech on Afghanistan on Monday night wasn’t remarkable for it’s new ideas-there wasn’t much new to be found. There wasn’t, as administration officials had led many to expect, a new number for the U.S. troop presence in Afghanistan, or a new approach to Pakistan, or a new regional strategy for South Asia. | The Atlantic >>

Thousands of people, predominantly from Iraq’s ethnic and religious minorities, have been subjected to sexual violence since Islamic State militants swept across vast swathes of Iraq in 2014. The report pays particular attention to members of the country’s Yazidi community, who were kidnapped and forcibly converted, enslaved or conscripted to fight for the militants. | U.S. News and World Report >>

The Trump Administration disclosed two major military decisions on Monday. The decision you probably didn’t hear about matters a whole lot more to our nation’s survival than the one you did. The decision everybody in the nation’s capital is talking about is President Trump’s adjustment in U.S. strategy for fighting the counter-insurgency campaign in Afghanistan. That move probably won’t change much about how America prosecutes its longest-running war. | Forbes >>

The Army has suspended its search for five soldiers missing since their UH-60 Black Hawk helicopter crashed in the ocean off Hawaii last week. After five days, “operations have now shifted to recovery and salvage efforts,” Army officials said in a news release issued Monday. | The Washington Post >>

“Some remains” of 10 missing US sailors have been found after the collision between the US destroyer John S. McCain and an oil tanker near Singapore, US Navy Adm. Scott Swift said Tuesday. Navy and Marine Corps divers found the remains in the sealed compartments aboard the McCain, said Swift, commander of the Pacific Fleet. | CNN >>

Skeptical at first, he is now in charge of the organization’s bee and pollination program and provides support to other veterans as the group’s outreach coordinator, she said. All staff have training on suicide prevention and how to support fellow veterans. | Herald Net >>

“My wife, Brooke, and I led the police-escorted ride of approximately 50 miles through Hendricks and Putnam counties,” event organizer Mike Mathis said. “Steve was a charter member of the Calvary Chapel Riders and was a greeter at our church for many yearsd. Steve loved motorcycles. So we preserve his passion each year with our benefit ride.” | The Flyer Group >>