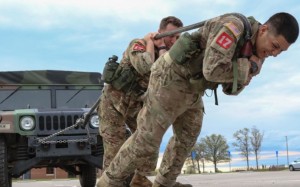 Time Lists Generals MacFarland, Robinson Among ‘Most Influential’
US Army Lt. Gen. Sean MacFarland, commander of US forces in Iraq and Syria, and US Air Force Gen. Lori Robinson, the first woman named to head a combatant command, have been listed by Time magazine as among the 100 most influential people worldwide.| Military.com >>

North Korea to Halt Nuke Tests If US Stops Drills
North Korea is ready to halt its nuclear tests if the United States suspends its annual military exercises with South Korea, the North Korean foreign minister told The Associated Press in an interview in which he also warned that his country won’t be cowed by international sanctions. | Associated Press >>

The former U.S. ambassador to Afghanistan, Zalmay Khalilzad, says one of the biggest problems facing Afghanistan continues to be its poor relationship with its neighbor, Pakistan. | Voice of America >>

The world must not let Afghanistan become a forgotten crisis, a senior Red Cross official said on Friday as he warned of spiralling violence, donor fatigue and a worrying “brain drain” of educated professionals. | Reuters >>

Pakistan has assured neighboring Afghanistan that peace talks with the Taliban “will resume in a month” to find a peaceful end to the Afghan conflict. | Voice of America >>

When the U.S. Marines arrived at Iraq’s Al Asad air base last year, 26 combat advisers sent there to help choreograph a battle plan for ousting the Islamic State group, they were greeted by local soldiers dumbfounded to learn the Americans had no intention of leading the fight from the front. | Military Times >>

Clashes between Kurdish and Shi’ite Turkmen paramilitary forces in northern Iraq have killed at least 10 fighters and cut a strategic road between Baghdad and the oil city of Kirkuk, security and medical sources said. | Reuters >>

Dolmo and his fellow trainees ran the drill over and over on their M9 pistols, practicing quick magazine changes and “tap and rack” drills to clear a malfunction — all while under the watchful eye of their instructors. | Navy Times >>

Amid heightened tensions with China over its territorial claims in the South China Sea, the Air Force sent an air contingent to Clark Air Base in the Philippines April 16. | Air Force Times >>

The Pentagon has shifted more than 100 U.S. soldiers from a desert camp near the Egypt-Israeli border in the Sinai Peninsula after a barrage of attacks by militants linked to Islamic State. | Los Angeles Times >>

Five years after being forced to leave the United States, a man who served in the Iraq War as a U.S. Marine was granted citizenshipThursday. | KTLA 5 >>

Six local veterans shared their stories about of re-adjustments to civilian life and their journeys out of depression and addiction, as well as how they found the hope and the strength to rebuild their lives. | The Shreveport Times >>

The military draft may be headed for the scrap heap.The House Armed Services Committee will include instructions to examine the Selective Service program’s viability and possible “alternatives” as part of its review of the annual defense authorization bill next week, staffers confirmed on Friday. | Army Times >>

Rep. Lynn Jenkins is pressing the Department of Veterans Affairs for information over allegations of sex abuse at a Leavenworth facility as lawmakers express frustration with the pace of reform at the agency. | The Topeka Capital-Journal >>

The Republican chairman of the House Armed Services Committee wants to slash nearly all spending for the Pentagon’s troubled $2.7 billion program to use radar-carrying blimps to search for enemy missiles approaching the East Coast. | Military.com >>