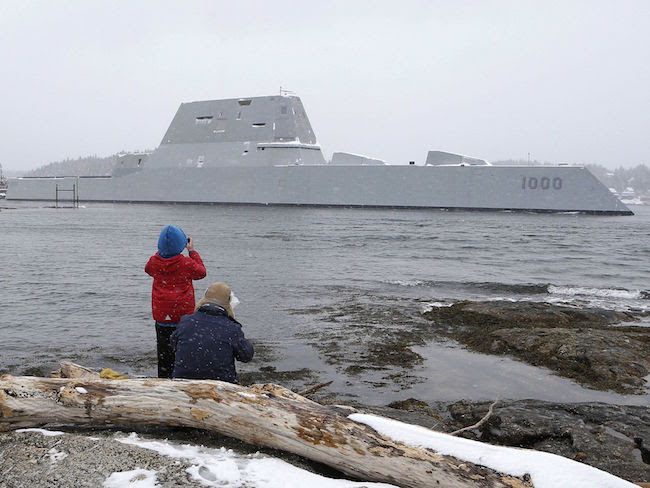 Dave Cleaveland and his son, Cody, photograph the destoryer as it passes Fort Popham at the mouth of the Kennebec River in Phippsburg, Maine, in late March as it heads to sea for final builder trials. The ship is so stealthy that the Navy resorted to putting reflective material on its halyard to make it visible to mariners during the trials. Robert F. Bukaty/AP | Military Times >>

Today’s Top Stories
Military suicides top Iraq deaths
The mounting toll of military suicides since 2003, an intractable problem highlighted again Friday with a murder-suicide at Joint Base San Antonio-Lackland, has surpassed the number of troops killed in Iraq. The number of suicides in all service branches reached 4,839 for 2003-2015. In the same period, 4,496 American were lost serving in Iraq, according to the latest Pentagon statistics, combined with previously released data. | Houston Chronicle >>

A Taliban suicide bomber on a motorcycle killed at least 12 army recruits on a bus in eastern Afghanistan on Monday, officials said, hours after a similar attack killed two people in the capital Kabul. | Reuters >>

Afghan trouble. The U.S. military command in Kabul has launched an investigation into an airstrike in southeastern Afghanistan last week that some locals claim killed as many as 17 civilians, SitRep has learned. Military officials insist that the strike targeted al Qaeda fighters and no civilians were killed. | Foreign Policy >>

At least 27 militants were killed in air strikes in Kunduz and Nangarhar province of Afghanistan over the past two days, official sources said on Monday. At least 16 militants were killed in a series of air strikes conducted against Taliban hideouts in northern Kunduz province on Monday, Xinhua quoted a security official as saying. | Business Standard >>