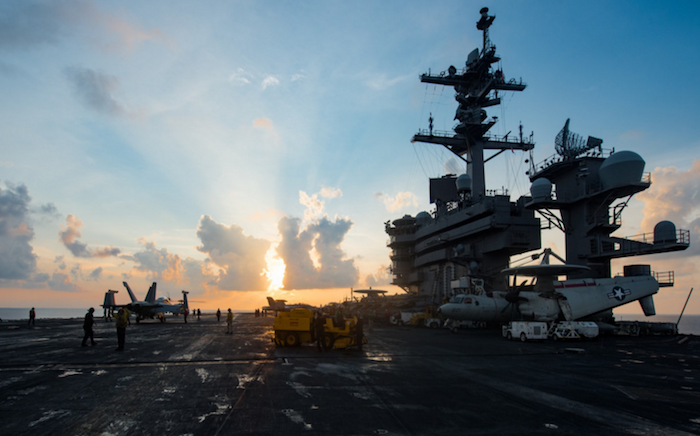 Jason Simcakoski, a 35-year-old Marine, husband and father, died at the Tomah VA  Medical Center in Wisconsin in 2014 from a toxic combination of prescription drugs. His overdose sparked national outrage, with some veterans calling VA hospitals “candy factories.” His death eventually led to the passage of the Jason Simcakoski Memorial Opioid Safety Act, which created stronger procedures for the prescription guidelines used by VA providers. | Fox News >>

VA officials announced Monday they have launched a new search committee to identify candidates to be the next Under Secretary for Health for the Veterans Health Administration, a key post that will be at the center of medical access issues facing the department. | Military Times >>

In a letter dated March 30, the VA accused scheduling manager Kuauhtemoc Rodriguez of violating “privacy standards you are expected to enforce [and] breaching your responsibilities as a supervisor,” by sending the media a copy of an email he wrote to the hospital director that detailed alleged harassment and included the name of a colleague as one of the top offenders. | Fox News >>

If true, it would be a sharp reversal of Moscow’s troubled Cold War adventures in Afghanistan, where leaders of what became the Taliban helped drive out Soviet soldiers who invaded in 1979 to prop up a communist government in Kabul. Back then, it was the U.S. under President Reagan that backed the Afghan mujahedin, or “freedom fighters,” against the Soviets. | The Los Angeles Times >>

Iraq’s Kurds plan to hold a referendum on independence this year to press their case for “the best deal” on self-determination once Islamic State is defeated, a senior Kurdish official said. The Kurds already run their own autonomous region in northern Iraq and the official, Hoshiyar Zebari, indicated the expected ‘yes’ outcome in a vote wouldn’t mean automatically declaring independence. | Reuters >>

I looked at the flier advertising my upcoming Seders at Bagram Air Field in Afghanistan: “Commemorate The Miracle that The LORD Redeemed Our Forefathers and Us from Egypt, praising the LORD for all the Miracles HE continues to do for us.” As a summary of how Southern Baptists, like its author, the command chaplain, understand the holiday of Passover, it was perfect. As a reflection of my Reform Jewish approach to everything from theology to publicity, it needed some work. | The Washington Post >>

The first of the U.S. Navy’s new class of aircraft carriers has headed out to sea. The USS Gerald R. Ford embarked Saturday on the first of its sea trials to test various state-of-the-art systems. The $12.9 billion carrier departed from Huntington Ingalls Industries-Newport News Shipbuilding in Newport News after more than a year’s delay and cost overruns.  | CBS News >>

Lockheed Martin’s F-35 has been described by some as the most costly weapons system in history, and the Navy’s plans to put the aircraft into service as part of its Joint Strike Fighter program have prompted a major debate within the defense industry. The Navy’s F-35C variant, capable of landing on aircraft carriers, would ultimately replace aging squadrons of Boeing F/A-18 Super Hornets, aircraft that are popular among much of the military’s top brass. Putting the F-35s into service would cost the Navy nearly $400 billion, a price tag that prompted the president’s criticism. | Newsweek >>

Golf may seem like a competitive game when you watch tournament play on television or in person. But to most who play the game, it is also a chance to be outside with friends or even alone for a friendly competition. Duane Sebastian is a Marine who served in Iraq in 2004 and had been playing golf before his service and continues to play today. | CBS 4 >>

“When you get out, you don’t really have a path to go on,” Brown said. “In the military, we are given a path and instructions of where to go and when. But once you get out, it’s like ‘good luck you are on your own now’ and some kind of fall by the wayside.” It’s a reality that many veterans face upon returning to civilian life and one that Wright has experienced first hand.  | The World Link >>

“A lot of what we do is just being around horses and people and learning to interact with both,” says Afghanistan War Veteran Chuck Waltrip. “A lot of people who come out don’t have experience with horses and then they find out that they can learn to trust them and are not going to hurt them and they find out a lot of self confidence and self worth through this.” | News Channel 10 >>