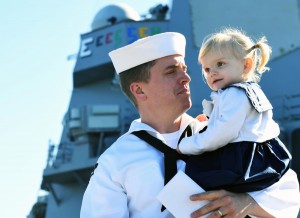 Just over two weeks after the Commander-in-Chief Forum aired during prime time on NBC, IAVA chief Paul Rieckhoff is still recovering from the event, riding the high of having had a big hand in pulling it off but also weathering a substantial wave of social media criticism — much of it from fellow veterans — about how it fell short. | We Are the Mighty >>

Imprisoned veterans received more than $100 million in improper benefits payments in recent years because Veterans Affairs officials were too focused on bringing down the first-time claims backlog, according to a new report from the department’s inspector general. | Military Times >>

When 68-year-old Marine veteran George Taylor died, no family or friends claimed him. Earlier this month, Jackie Gluekert and her funeral home made sure the hero got a dignified send-off — a burial in an a national cemetery. “It is a final salute, and I’m proud to do it,” Jackie Glueckert says. | CBS Chicago >>

The deadliest attack took place in the eastern New Baghdad neighborhood, where a bomber approached a gathering of construction workers and set off his explosives-laden vest, killing 11 civilians, a police officer said. At least 28 civilians were wounded and the explosion damaged nearby shops and cars, he said. | ABC News >>

Taliban leaders tuned into Monday night’s debate between Hillary Clinton and Donald Trump from a secret location in Afghanistan, a spokesman for the militant group told NBC News. “We were very interested in watching,” said Zabihullah Mujahid. | NBC News >>

Iraq opened a new antiquities museum in the southern city of Basra on Tuesday with pottery, coins and other artifacts dating back more than 2,000 years. Only one hall was opened due to a shortage of funds, Qahtan al-Obaid, the museum director, told The Associated Press by telephone. It will showcase artifacts dating back to 400 B.C. that tell the history of the oil-rich city on the Persian Gulf. | US News and World Report >>

The agreement forged by Secretary of State John Kerry and his Russian counterpart could, for the first time, broaden the American-led air campaign’s target list to include al Nusra, the notorious al Qaida-linked group that is a major actor in the multi-sided Syrian civil war. Until now, the two-year-old U.S. air campaign in Syria has been limited to ISIS. | Military Times >>

“We have a range. We’re going to refine it. And they’ll get a refined number when [Congress members] return in November, hopefully to pass a budget for the federal government,” Carter told reporters during a visit to Minot Air Force Base in North Dakota. | Defense News >>

“The annual influenza vaccine is the best defense against influenza. The military community is a highly transient one, which increases the potential for exposure and the spread of infectious diseases such as influenza,” according to an announcement posted on the DoDEA website. | Military Times >>

“I wanted something that I could pass along to my kids and say this is me,” said Scott Cruse, co-owner of Sister Sue’s Homemade Jams and Jelly’s. Navy veteran Scott Cruse was in a state of depression which stemmed from an injury that cost him his ability to stand. “My foot and ankle separated and I’ve had ten surgeries on it. They are still not right,” Cruse stated. | WHAG >>

Martinez is a U.S. Army veteran, best-selling author, actor and motivational speaker. “It’s an honor to be named as the keynote speaker for this event,” Martinez said in the release. “… Primarily because of the man who we gather to honor, but also, because of the large number of people from all walks of life who will be there to honor Dr. King.” | The Daily Orange >>

“They were being introduced to adaptive sports for the first time. We brought them in to be introduced to something that’s going to take them off that couch, back into their community. It’s something they can do with their families as well as with other warriors,” AFW2 Section Leader Tony Jasso said. | WOWT >>