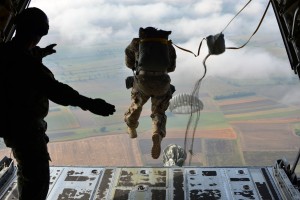 “I come from a generation of war vets who had no voice for decades, who were rejected by vets from previous wars not to mention the nation at large,” Smith says. “I was blown away by the brilliance of this forum, this first time we had the undivided attention of both candidates. I hope this is the first of many.” | We are the Mighty >>

More than one-third of calls to a suicide hotline for troubled veterans are not being answered by front-line staffers because of poor work habits and other problems at the Department of Veterans Affairs, according to the hotline’s former director. | ABC News >>

A federal appeals court this month allowed the Veterans of Foreign Wars, AMVETS, Iraq and Afghanistan Veterans of America and nine other groups to join the lawsuit between Helman and the VA. They argue the law used to fire her is constitutional and should be upheld. | Stars and Stripes >>

“This is going to be Fallujah in 2004,” one intelligence official said of the upcoming battle for Mosul, expected to be launched as early as next month. Pushing ISIS out of the city is only the beginning, the intelligence official said — coalition forces are gearing up for what ISIS fighters might leave behind in the dense urban battlefield. “You’re not going to be worried about [car bombs], you’re going to be worried about whole buildings wired to explode.” | Buzzfeed >>

Officials and witnesses in Afghanistan say fighters linked to Islamic State have regained control of most of the militant group’s former strongholds in the country, weeks after retreating to remote mountain hideouts in the face of major Afghan security operations. | Voice of America >>

The northern Iraqi village of Bashir has been all but flattened by war. Abandoned houses lie in heaps of rubble along the eerily quiet streets. Upon first glance, the village appears uninhabited, but every now and then a solemn-looking child will appear in a doorway. Down one dusty alley, a teenage boy plays with a live electrical wire, causing showers of sparks to dance across the ground. | Foreign Policy >>

The dire warning from the Pentagon comes almost one week after a shell that tested positive for “mustard agent” landed inside the wire at Qayara West, an Iraqi-controlled air base where several hundred U.S. forces are helping Iraqi Army units build a staging area for the upcoming offensive into Mosul. | Military Times >>

“’The Few, The Proud’ does a great job distinguishing ourselves from the other branches and making us prestigious to recruits, but it doesn’t say anything about what we do or why we exist,” Caldwell told Marine Corps Times. “We believe the new campaign products require a unique tagline to achieve the effort’s objectives.” | Military Times >>

At Gruntworks, a warehouse-style test facility for infantry gear that abuts The Basic School aboard Quantico, Virginia, a handful of enlisted artillery Marines huddled around a general, talking gear. | Military.com >>

CVMA members donated more than four hours of their time Saturday morning painting the home before riding to a benefit for a fellow veteran in Milwaukee. Group leader Mike Marquette, a retired U.S. Army Lt. Colonel who served in Panama, Bosnia and Iraq, said veterans like to help other veterans. | Beloit Daily News >>

For some people, inheriting a bunch of old car parts from their father-in-law would have been an annoyance. Not Aaron Raher. He saw it as an opportunity to share a project with his dad, Richard. All they had was the body shell and the naked frame from a 1957 Chevrolet 210, but that didn’t stop the father-son duo. | Road and Track >>

“It’s amazing just to get out and experience the outdoors and the snow with several veterans,” said Christopher, 44, who served in Desert Storm, Guantanamo Bay and Iraq. “There are things that you could probably never do as a guy that has a disability, so to have people around that have worked with these people that have disabilities that are willing to help you and make this experience a great time for you is amazing.” | Tahoe Daily Tribune >>