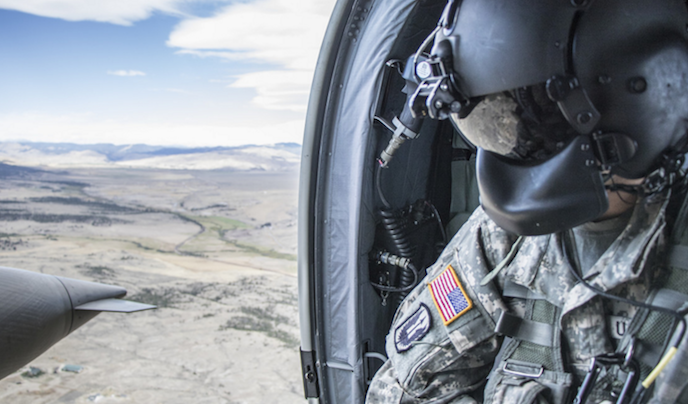 A crew chief with he 1-189th Aviation Battalion from Helena, Montana, watches from above the city as Montana National Guard Best Warrior participants are transported in a UH-60M Black Hawk on Sept. 10, 2016. | Military Times >>

Two U.S. senators said Tuesday they asked for an investigation into a whistleblower’s report that an Army veteran killed himself while awaiting treatment for post-traumatic stress disorder at a U.S. Department of Veteran Affairs clinic in Colorado Springs. | Military.com >>

Like many students attending the now-defunct ITT Technical Institutes when it closed earlier this month, Byron Sumpter was depending on the school to get a degree and all the economic benefits he hoped would come with it. But he was also relying on the opportunity to stay in school for another reason: a large part of his income was tied to being enrolled. | Market Watch >>

“Our job is to actually help the Iraqis generate the forces and the support necessary for operations in Mosul and we’ll be ready for that in October,” Dunford told a small group of reporters traveling with him. | CNN >>

Afghan authorities will sign a peace accord on Thursday with Hezb-e-Islami of Afghanistan, a party led by one of the country’s most prominent Islamist warlords, the government’s media office said. The long-expected deal with Gulbuddin Hekmatyar, a veteran of almost 40 years of fighting in Afghanistan, follows months of negotiations aimed at bringing his group, which has long been allied with the Taliban and al Qaeda, into the political fold. | Reuters >>

Hoshyar Zebari, a former foreign minister and prominent Kurdish politician, was ousted after weeks of political wrangling over corruption allegations and accusations of misuse of funds. Zebari’s opponents did not file formal charges or publicize any evidence. Zebari has denied any wrongdoing. | Seattle Times >>

One pilot is dead after a United States Air Force aircraft crashed shortly after takeoff Tuesday morning roughly 50 miles north of Sacramento, according to the Beale Air Force Base in California. | NBC >>

The band, known as “Dash Ten,” ripped through a blistering set list Friday evening at the student residence halls quad at Belmont Abbey College. The three-member band is made up of active duty soldiers Sgt. Corrin Campbell, the lead singer and bassist, and Staff Sgts. Peter Greenberg, the drummer, and Stephen Ebert, the guitarist. | Gaston Gazette >>

“At first it was kind of a mission to play golf, meet some new friends and do something that’s a little more organized than what was currently out there,” Peyton said. “Then it’s become, the last two years, it’s become my mission and my passion in life to spread awareness to other veterans how golf can literally change your life.” | Fayetteville Observer >>

“None of these were related ironically enough to any of my time in service most of them were kind of the transitional period of what it’s like to try to be in a world where you don’t feel like you fit in anymore, to the civilian kind of things because of the things you’ve seen,” Gaunky said. | WKBT >>