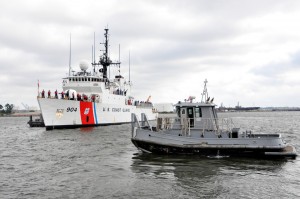 First lady Michelle Obama and former first lady Laura Bush on Friday urged the next occupants of the White House to be vocal advocates for veterans and servicemembers, because the challenges and sacrifices of those military families isn’t over. | Military Times >>

The American Red Cross has unveiled its new Hero Care mobile application. This free app is designed to help members of the military, veterans and their families identify and access both emergency and non-emergency Red Cross services from anywhere in the world. | Patch >>

A North Dakota Army National Guard unit has received an alert notification for possible mobilization in Afghanistan. About 30 members of the Fargo-based 191st Military Police Company were placed in an alert status. The unit has detachments in Mayville and Bismarck. | Associated Press >>

The first Iraqi families returned over the weekend to broken homes and businesses in Fallujah nearly three months after the country’s military drove out Islamic State fighters, in a resettling process mired in tensions. | The Wall Street Journal >>

Afghanistan’s president made a two-day trip to India this week, where New Delhi pledged $1 billion in developmental aid and signed other deals for extraditing criminals and terror suspects. That has raised concerns in India’s rival, Pakistan, which has long viewed New Delhi’s ties to Afghanistan with suspicion. | Voice of America >>

The Navy’s Blue Angels stunt team will stop performing the aerial maneuver that a pilot attempted before a fatal crash in June, and the team will implement a variety of other changes after an investigation found pilot’s errors caused the crash, Navy officials said Thursday. | The Boston Globe >>

The Occupational Physical Assessment Test, or OPAT, is currently being tested with new recruits. The gender-neutral test is designed to help determine which MOSs a person can sign up for based on how well they perform. For example, prospective soldiers who want to go into a combat arms job such as infantry will need higher scores than recruits vying for a different MOS. | Army Times >>

A wildfire burning at a central California Air Force base on Sunday forced the postponement of a satellite launch, officials said. An Atlas 5 rocket was to carry a satellite known as WorldView-4 into orbit from Vandenberg Air Force Base. The satellite is designed to produce high-resolution images of Earth from space. | US News and World Report >>

Michael Le Buhn thought he was “fine” when he returned from a tour of duty in Iraq around Christmas 2007. But the rigors of war, made more intense by the fact he was injured in a blast, which earned him a Purple Heart, left him in a mental shape that was anything but OK. The U.S. Army veteran had great difficulty sleeping, and when he was able to doze off, he encountered “horrible” nightmares. | Daily Journal >>

Mr. Harris, a former Army medic, gazed through a diving mask at a manta ray the size of a hang glider doing slow somersaults above shifting schools of silver fish. A 21-foot whale shark brushed silently by, inches from his face, its broad, spotted back taking up his entire view. Immersed in the moment, he forgot about the world. | The New York Times >>

With sweat streaming, James Dennis doused himself with bottled water as the lower half of his body ached Saturday after a bicycle ride over the course of two weeks from Chicago to Aubrey. His journey extracted a heavy toll. A severed back tire mid-trip demanded immediate maintenance, and a late trip to the emergency room was made at his last overnight stop in Oklahoma on Friday because the physical pain he endured exacerbated from the constant strain. | Denton Record Chronicle >>