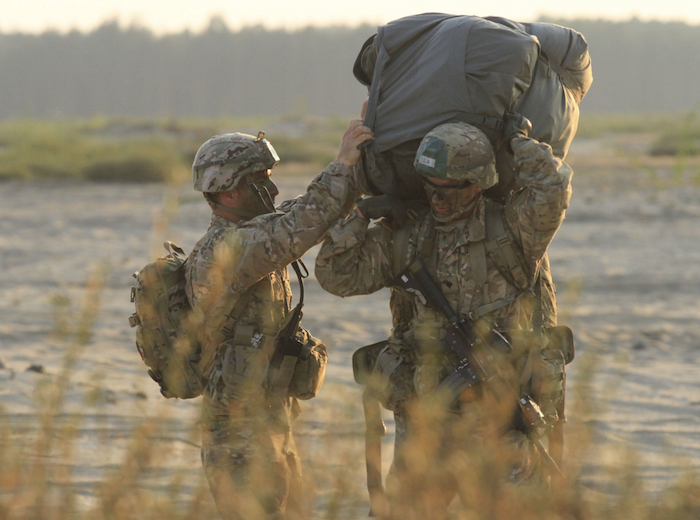 During testimony before the Senate Veterans Affairs Committee, McDonald said that VA embraces 15 of 18 proposals set forth by a congressional advisory panel and wants to create a health care system that incorporates public facilities and private health networks to treat veterans. | Military Times >>

The House passed Department of Veterans Affairs reform legislation Wednesday evening that would change the process veterans use to appeal benefits claims and make it easier for the agency to fire bad employees. | Stars and Stripes >>

Humphries and I were standing in a lab in the basement of the Veterans Affairs hospital in the Jamaica Plain neighborhood of Boston. He had led me through a labyrinth of windowless rooms, packed with robots handling tubes of blood donated from veterans, pipes roaring with coolant, and gorilla-sized tanks of liquid nitrogen, until he stopped next to a featureless wall. | Fox News >>

Baghdad has been discriminating against the province of Kirkuk in northern Iraq and has not been paying its dues for oil revenues since 2014, so there is no logic for the disputed province to stay with Iraq, the governor of Kirkuk, Najmadin Karim, has said in an interview with the Voice of America’s Kurdish service. | Business Insider >>

The United States said Wednesday it would give Iraq $181 million in humanitarian aid, anticipating a wave of displaced people when Iraqi forces launch a drive to recapture Mosul from Daesh (ISIS). The advance on Mosul, the biggest city held by the militant group, could begin as soon as next month. | Daily Star >>

The Army does not have proper documentation to confirm that 73 soldiers with post-traumatic stress disorder or traumatic brain injuries underwent required medical exams before being discharged, it said in a letter to Sen. Chris Murphy (D-Conn.). | The Hill >>

The USS Jackson, an Independence-class Littoral Combat Ship (LCS) meant for patrols in shallow water, just passed the first of three scheduled “shock trials.” The shock trials are composed of the ship sailing along as the Navy carefully detonates 10,000 pound bombs on either side of it. The results are then measured. | Business Insider >>

The U.S. Army and Marine Corps plan to continue their collaborative efforts to develop and test uniforms and personal protective equipment for marines and soldiers. | Executive Gov. >>

“Sometimes we need to be reminded that there are people who will listen even if we don’t want to open up,” Geyer said. “The military teaches you how to take away your emotions, but it doesn’t teach you how to get them back when you come home.” | Pasadena Star News >>

French said about 75 percent of the veterans they have worked with suffer from post-traumatic stress disorder or traumatic brain injuries. About 130 veterans have graduated from the basic training program in similar three-day events across the country: San Francisco, Charleston, San Diego, Galveston and more, including Annapolis this week. | Capital Gazette >>

As Geary spoke on Tuesday from just inside a towering red barn, Parker stood nearby. Also an Army veteran, Parker served two tours in Afghanistan from 2009 to 2010 and 2011 to 2012 in the infantry before returning to civilian life. With several white goats moving around them, the men took time from their many chores to explain how the program works. | New Hampshire Union Leader >>