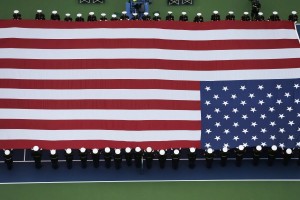 U.S. Marines spread an American Flag over the court at Arthur Ashe Stadium before the women’s singles final of the U.S. Open tennis tournament on Sept. 10, 2016, in New York. Julie Jacobson/AP | Military Times >>

Previously, VA required veterans to apply in person at a VA medical center or submitting a paper application to the department. But the system was beset with problems, creating a backlog of 847,882 applications that stretched back nearly 15 years and included submissions from more than 300,000 deceased veterans. | Military Times >>

A local Iraq War veteran is among more than 6,800 GI beneficiaries who enrolled at ITT Technical Institute — only to be out of education when the school system abruptly shut down. And Ted Lindley, along with the thousands of others, are wondering what to do next and are unsure whether other schools will accept their college credits. | NBC San Diego >>

The House on Tuesday will take up another of a string of bills designed to give the Department of Veterans Affairs a freer hand in disciplining its employees for poor performance or misconduct — provisions the Obama administration has opposed, although not to the point of threatening a veto. | The Washington Post >>

A decade-and-a-half after the U.S. invasion, Afghanistan is still rebuilding and heavily dependent on international aid, relying on other countries for 70 percent of its government budget. | PBS >>

American warplanes eliminated a “significant chemical threat” to Iraqi civilians by bombing a complex of buildings near the northern city of Mosul that Islamic State militants had converted from pharmaceutical manufacturing to chemical weapons production, the three-star general in charge of U.S. air operations in the Middle East said Tuesday. | Fox News >>

At a recent conference at the Center for American Progress, Chief of Naval Operations John M. Richardson discussed at length naval operations in Asia and the Pacific, touching on how he’d like to deal with the Iranian navy, which has made a habit of harassing US Navy ships in the Persian Gulf. | Business Insider >>

Talking with reporters during the AIAA Space 2016 conference here, Winston Beauchamp, deputy under secretary of the Air Force for space, said the Air Force was participating in the investigation of the pad explosion Sept. 1 that destroyed a Falcon 9 and its commercial satellite payload, postponing future launches of the vehicle for at least several months. | Space News >>

When Army veteran Noah Galloway, 34, lost his left arm and left leg during an IED attack in Iraq 11 years ago, he spent the next five years in a deep depression. “It was hard to get out of bed,” Galloway, author of “Living With No Excuses: The Remarkable Rebirth of an American Soldier” (Center Street), tells The Post. | New York Post >>

For retired Army Sgt. Norberto Roman, founding the Rescue 22 cycling team for the Face of America two-day, 110-mile bike ride from Arlington, Virginia, to Gettysburg, Pennsylvania, was about the fellowship and sense of family he receives from the group while they spread the importance of suicide prevention. | Defense.gov >>

“We’ve all experienced friends who’ve been injured in combat, friends who have killed themselves,” Kinkead said. “A good friend of mine took his life. He was my roommate after we got back from Afghanistan.” He started the trek on his own and met Taylor in New Hampshire. | WCVB >>