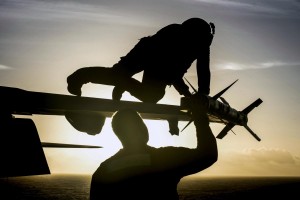 The letter comes just days after a Government Accountability Office report found shortfalls in the Defense Department’s monitoring of burn-pit victims, and asks White House officials not to let the Pentagon and Department of Veterans Affairs “sweep us under the rug.” | Military Times >>

Staff Sgt. Adam S. Thomas, 31, was killed by an improvised explosive device while on foot during an operation against the Islamic State, defense officials said. He was from Takoma Park, Md., and had been in the Army eight years. His death was disclosed Tuesday, but defense officials withheld his name while notifying family members. | The Washington Post >>

The Department of Veterans Affairs will begin covering costs for in vitro fertilization and adoptions for combat-wounded veterans struggling with infertility because of their injuries, giving thousands of young veteran families fresh hope at starting a family, advocates say. | The Washington Post >>

Iraq has requested an emergency meeting of the United Nations Security Council to discuss the presence of Turkish troops on its territory as a dispute with Ankara escalates. Turkey’s parliament voted last week to extend the deployment of an estimated 2,000 troops across northern Iraq by a year to combat “terrorist organizations” – a likely reference to Kurdish rebels as well as Islamic State. | Reuters >>

“Many families were unable to bring their possessions with them and are in a precarious position. We have had reports that some families have been forced to sleep out in the open and many have few food supplies,” Dominic Parker, head of the U.N. Office for the Coordination of Humanitarian Affairs, said on Thursday. | The Wall Street Journal >>

Until recently, Iran was portrayed as the “black sheep” of major oil producer group OPEC, having previously rejected plans to cut or freeze production – but now Iraq is increasingly looking like the potential dissenter in the 14-member organization. | CNBC >>

The U.S. Navy has prepared a naval task force to assist countries impacted by Hurricane Matthew. The aircraft carrier George Washington, amphibious transport Mesa Verde, and hospital ship Comfort could provide food, water, and medical care to tens of thousands in the path of the Hurricane currently barreling through the Caribbean. | Air Force Times >>

“What we need to do … is take a hard, systemic look at that and determine … if it’s working or not working,” said Gen. Mark Milley, Army chief of staff. “If it’s not working, what is the reason? Is it because it’s joint basing, or is it something else at play here?” | Military.com >>

The nearly 6,000 recruits at Marine Corps Recruit Depot Parris Island, South Carolina, are being moved out of the path Hurricane Matthew, Marine Corps officials said on Wednesday. The recruits are to be evacuated to Marine Corps Logistics Base Albany, Georgia, where they will be able to conduct “limited training,” said Capt. Gregory Carroll, a spokesman for Parris Island. | Marine Corps Times >>

A full Ironman triathlon is grueling, consisting of a 2.4-mile swim followed by 112 miles on a bicycle and then a 26.2-mile run. All of this is completed in one day, with no stops in between. Now imagine doing that without being able to see. | CNN >>

Marine Corps veteran Sean Gobin stands at the edge of the plateau on Mount Katahdin in Maine. After three combat deployments he decided to hike the 2,100-mile Appalachian Trail as a way to transition to civilian life. | NPR >>

“I went running out, up the hill and saw the RV on fire. Then I asked if someone was inside and he said, ‘Yes, my girlfriend is in there looking for the cat,'” said Chmielnicki. Chmielnicki, a Navy veteran who served in Iraq, is now being recognized nationally for what he did next. | AOL.com >>