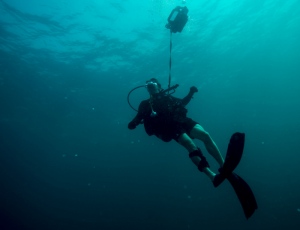 Paul Rieckhoff, founder and CEO of Iraq and Afghanistan Veterans of America, called Carter’s announcement a “good step” but “long overdue and far from enough.” Thousands of veterans have seen their lives “turned upside down” and are “now in financial ruin through no fault of their own,” Rieckhoff said. “The Pentagon needs to do more than just halt” the collection efforts from soldiers, Rieckhoff said: “It needs to pay them back – with interest.” | PBS >>

“There’s a promise that we make to service members, that if you serve and you put your life on the line or sacrifice in whatever way you do, we’ll take care of you. I didn’t know what that was going to look like, it’s certainly not what I saw,” Anderson said. “This is something the VA should have been prepared for.” | WNCN >>

U.S. lawmakers on Thursday pressed the Pentagon to find a fix for the thousands of California National Guard members forced to pay back improperly awarded bonuses. A group of more than 100 members of Congress asked Defense Secretary Ashton Carter and Chief of the National Guard Bureau Air Force Gen. Joseph L. Lengyel to work with them to address the controversy. | Military.com >>

As coalitions go, the one pieced together to dislodge ISIS from its Iraqi stronghold in Mosul is an odd one. For now, its members are working together, but uneasy alliances and divergent motives could be tested as fighting intensifies, experts told FoxNews.com. | Fox News >>

The United States military carried out airstrikes on Sunday in eastern Afghanistan aimed at two of Al Qaeda’s most senior leaders operating in the country, an attack described as one of the most significant in Afghanistan in several years, the Pentagon announced on Wednesday. | The New York Times >>

“In the first few days, the fire did not appear to be particularly energetic and our preliminary observations suggest that much of the sulfur dioxide remained in the boundary layer and the lower troposphere, which accentuates the impact on air quality and health,” said Simon Carn, an atmospheric scientist at Michigan Tech. “More recently, sulfur dioxide has been lofted to higher altitudes where it may undergo long-range transport.” | ABC News >>

The Air Force is now offering bonuses of up to $175,000 to keep airmen engaged at piloting drones. For some drone pilots, the Air Fore is offering as much as $35,000 annually as a bonus to keep them from leaving, that is, if they sign on to a five-year service contract, Air Force Times reports. | Daily Caller >>

This year he is attempting to break another record. He plans on setting a new world record for most tire flips in a 1-mile course, and he plans on doing it in New York City along the Veterans Day Parade route on November 11th. | CBS DFW >>

“I would always attend that, look at all the various activities,” Craig said of the Mummers Parade. “I was never in the parade growing up. This is going to be pretty special. It’s kind of like Cory gets the opportunity to see some of my childhood memories.” | Herald Mail Media >>

Jordan Bobert never would have seen himself golfing at the Veteran Golfers Association National Championship Oct. 18 and 19 at Fallen Oaks Golf Club in Biloxi, Miss., but in a field filled with active-duty service members, veterans and wounded warriors, Bobert was competing in the VGA’s second national tournament. | JBLM NW Guardian >>