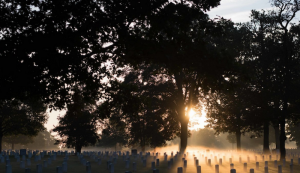 Although Veterans Affairs Secretary Bob McDonald has asserted that more than “90%” of the VA’s medical centers have “new leadership” or “leadership teams” since he took over the troubled agency in 2014, a USA TODAY investigation found the VA has hired just eight medical center directors from outside the agency during that time. | Stars and Stripes >>

Veterans are frustrated their issues have been absent from the presidential debates so far. The war in Afghanistan has also gone almost without mention. | NPR >>

Roughly half of World War II veterans went on to own or operate their own business, as well as 40 percent of Korean War veterans, Inc reports. But so far, only 4.5 percent of the more than 3.6 million people who have served in the U.S. military since Sept. 11, 2001, have launched their own company. | The Week >>

Maj. Gen. Gary Volesky, commander of U.S. and coalition land forces in Iraq, said this transition from conventional combat to counter-insurgency is deemed so predictable that the U.S. training regimen for Iraqi security forces is already being adjusted to prepare them for insurgent threats. | Fox News >>

Two Americans were killed and another three were injured in a rare attack on foreign troops in the Afghan capital Wednesday, U.S. and Afghan officials said. A gunman fired on international advisers at an ammunition depot near Camp Morehead, a training site for Afghan commandos, about six miles south of Kabul. | Washington Post >>

An Iraqi general said Wednesday that as many as 6,000 Islamic State fighters are inside Mosul, as the massive operation to retake control of the embattled city entered its third day. | USA Today >>

An Air Force base in Colorado said Tuesday it accidentally released about 150,000 gallons of water containing toxic chemicals into the sewer system of the adjacent city of Colorado Springs, but the potential health hazards weren’t immediately known. | CBS News >>

The U.S. Army and Tufts University are working together to learn more about how people think and respond under stress. Their new cognitive sciences center officially opened Tuesday in Medford, Massachusetts. The research aims to help soldiers and civilian first responders, such as firefighters. | Hickory Record >>

“The Florida community may experience hurricane destruction frequently and all of us at Team Rubicon are here to lend a hand where we can.” said Christopher Scroggins, Operation Loggerhead Incident commander. “Our volunteers are ready to mobilize at any moment to help out our communities.” | News 4 Jax >>

Through a local nonprofit group, several veterans and their spouses spent an all-expenses-paid visit to the Wood River Valley last week, participating in activities such as fly fishing and archery, intended to relieve the stresses that come from combat. | Idaho Mountain Express >>

Veterans Day is a time to honor US veterans and victims of all wars. Not only will there be a parade this year there’s also an event taking place at the Madison County Courthouse that will tell the story of those who’ve served our country. | WSFA >>