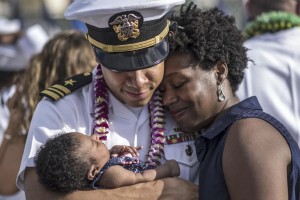 The California National Guard scandal reveals a trend that many veterans have grown to recognize: As the wars fade from the public eye, veterans are being left behind. Weíre nearing the end of the nastiest presidential campaign in recent memory, and we havenít heard any substantive discussion of how the prospective commanders in chief would improve services for veterans in any of the presidential debates. | BillMoyers.com >>

The stellate ganglion block is offered as treatment for PTSD at a handful of Army hospitals, including Landstuhl Regional Medical Center in Germany, but it has yet to gain wide acceptance as a therapy for the disorder because of the lack of clinical evidence proving the intervention works. | Stars and Stripes >>

Islamic State fighters targeted Iraqi troops with car bombs and ambushes in Mosul, stalling an army advance in their north Iraq stronghold, but faced attack on a new front on Sunday when U.S.-backed rebels launched a campaign for the Syrian city of Raqqa. | Reuters >>

Afghan Taliban militants have strengthened their grip on lucrative illegal mining operations in the north of the country, as security forces focus most of their efforts on battling the insurgency in the volatile south, officials said. Abuses by local commanders with private militias and beyond the purview of central government have also driven people into the hands of Islamist fighters, the officials added, making it easier for them to profit from small-scale mines in the region. | Reuters >>

Ambulances are being used as suicide bombs in Iraq as coalition forces step up the campaign against ISIS. The terror group has claimed responsibility for the suicide attacks that have killed 21 people in the Iraqi cities of Tikrit and Samarra. | The Daily Beast >>

The Marine Corps Times reports the recruit had been assigned to the 2nd Recruit Training Battalion at the Marine Corpsí East Coast training depot. Base officials said in a statement the recruit was found in his bed unconscious on Friday evening, and was pronounced dead sometime thereafter. | CBS News >>

The work is being led by a new office at Wright-Patterson Air Force Base, Ohio, that was stood up to experiment with new technologies and strategies and to help keep the service on track with its 30-year plan. | Air Force Times >>

Mabus talked about the great relationship the Navy shares with the city of Jacksonville and explained an important decision he made to ensure people who live in the community are the ones working on area bases. | Stars and Stripes >>

ìItís a true honor, a true blessing,î said Vergara, 40, now a detective in the NYPDís Intelligence Bureau Executive Protection Unit. ìBut I donít feel like I deserve it. I feel that I should have done more.î | The New York Daily News >>

ìIn serving our country as a systems safety engineer at the Naval Surface Warfare Center Dahlgren Division, Tiffany Owens has also gone above and beyond in service to her community,î said Karen Davis, Naval Sea Systems Command Executive Director for Surface Warfare, to the audience before presenting the award to Owens. | The Free Lance Star >>

“I don’t know,” he said. “There are a million reasons. First of all, I get more out of them than I give them. To me, spending time with somebody at the end of life is better than a spiritual experience at church sometimes.” | The Hartford Courant >>