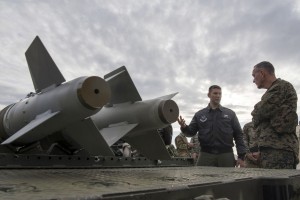 Gen. Joe Dunford, chairman of the Joint Chiefs of Staff, meets with the crew of a B-52H at Minot Air Force Base, N.D., Nov. 2, 2016. Petty Officer 2nd Class Dominique A. Pineiro/Navy | Military Times >>

Tens of thousands of Army National Guard soldiers outside of California also had their re-enlistment and education bonuses flagged for review, a step that could have led to recoupment of money in some cases, the National Guard Bureau said Thursday. | Stars and Stripes >>

Earlier this year, a department news release called the 2014 changes “the most significant culture and process change at VA in decades, with the primary goals of putting Veterans first and becoming the top customer service organization in government.” | The Washington Post >>

The agency, which is part of the Department of Human Services, issues an annual National Survey on Drug Use and Health. This year’s report is the first one to contain specific information about military spouses and children of military personnel. | Stars and Stripes >>

With the exception of its highly regarded counterterror forces, Iraq’s military will follow its campaign plan started more than two weeks ago. What it will probably not do is change that strategy on the fly to exploit enemy weaknesses as the fighting unfolds, raising concerns that Iraq’s military may miss opportunities for a quicker and more decisive victory over the Islamic State. | USA Today >>

In its latest mishap, the USS Montgomery, an Independence-class LCS that’s been in service less than two months, sustained an 18-inch-long crack to its hull while passing through the Panama Canal en route to its homeport in San Diego. | CNN >>

U.S. Army Europe’s aviators and their European counterparts are aiming to get more helicopters in the air for upcoming war games, increasing the profile of Army airpower in a training regime that has long focused mainly on ground forces. | Stars and Stripes >>

Capt. Shane Morgan has more than $30,000 in bills left after he suffered a heart attack during a PT test last year. A month ago the Army told the reservist he’d have to cover them himself, but has now reversed its decision. | Army Times >>

Local veteran Solomona “Mona” Laupua answered the call to serve his country not once but twice, and his son Jeremiah “J.D.” Laupua is now following his footsteps into the military. The senior Laupua is a veteran of both the U.S. Marines and U.S. Army. | The West Side Index & Gustine Press-Standard >>

For the 28-year-old, scuba diving is a world where he can let go of the painful reminder of a 2009 vehicle rollover accident in Camp LeJeune, North Carolina: the muscle spasms from the blunt trauma to his back, the phantom pain in his left hand where all but one finger was amputated.| The Miami Herald >>

A military funeral usually includes an honor guard, the folding of a United States flag, and the playing of “Taps” by a bugler. It’s a ceremony meant to honor those who have served in the U.S. military and memorialize their actions. That’s why John Mras, a former Army Staff Sgt., called on Idaho’s National Guard and local American Legion veterans to help honor Taran, his retired military working dog who passed away from cancer on Oct. 22. | Idaho Statesman >>