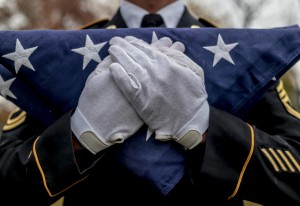 A soldier from the New Jersey Army National Guard holds an American Flag during a memorial ceremony and monument dedication in Passaic, N.J., Nov. 9, 2016. The ceremony was for 15 Passaic soldiers who perished in a plane crash in 1961. Tech. Sgt. Matt Hecht/National Guard | Military Times >>

If it stands, the raise will be the fourth in a row where troops’ pay hikes fail to keep pace with those of civilian peers. House lawmakers have proposed a 2.1 percent “full” pay raise, but need to carve out more than $300 million in new funding to pay for the extra increase. | Military Times >>

The facility’s owner, the Goodman Group, had dropped its contract with the Department of Veterans Affairs because of “extensive” regulations required in order to accept VA benefits, a company spokesman told the Missoulian newspaper in March 2015. | Stars and Stripes >>

Simon said he complained to VA officials and voiced his concerns about the alleged unsanitary water conditions. According to Simon, the “VA reacted by denying it.” Simon worked at the Houston VA from July 16, 2012, until Dec. 31, 2013, when he resigned and says he has been a target ever since. | SE Texas Record >>

Six weeks into the battle, the force made up of 50,000 troops, Shiite and Sunni tribal militias and Kurdish fighters is a long way from winning back the country’s second-largest city. The fight is showing the limitations of Iraq’s military and security forces, suggesting it has still not fully recovered from the collapse it suffered two years ago in the face of the militants’ blitz across much of northern and western Iraq. | Military Times >>

“The launch of the new road presents significant opportunities for Afghanistan, Tajikistan, China, India, Pakistan, and the Pacific region and creates favorable conditions for increasing freight traffic all the way onto Iran, Kazakhstan, Russia, Azerbaijan, and Europe,” Berdymukhamedov said at the ceremony. | The Boston Globe >>

The offensive to free Mosul of Islamic State militants is now in its second month, and progress has slowed as troops try to avoid mass civilian casualties. The military officially bans reporting on its numbers of killed and injured, although field medics have noted at least dozens of soldiers have died. | ABC News >>

The Pentagon has used the authorization 4,705 times since 2014, according to data from each reserve component released to Stars and Stripes, including the new count of 2,925 from the Army Guard released Monday by the National Guard Bureau. | Stars and Stripes >>

The U.S. military is undergoing drastic changes as it establishes itself in the 21st century. Female service members who are, or plan to be, pregnant will soon see a uniform that is more inclusive to their needs. A group of 60 female airmen who tested the new prototype uniform for the U.S. Air Force hope to see the new clothing roll out next October. | Townhall >>

On the heels of a widely praised 2015 decision to issue the more maneuverable M4 carbine in lieu of the M16A4 to Marines in infantry battalions, the Marine Corps may be on the cusp of another major weapons decision. | Business Insider >>

This time, instead of trudging across the dusty landscape of Afghanistan and battling the Taliban, the men have traveled the Tampa Bay area, battling bureaucracy, the real estate market and the challenges of finding a home for a 19-foot-tall commercial still. | Army Times >>

Riedner served in the Army beginning in 2006 and deployed with the 86th Engineer Dive Team. His team worked on bridge missions in Iraq and inspected quay walls for explosives prior to U.S. ships berthing in the Middle East. One of his missions involved locating and returning remains from a World War II bomber off the coast of France. | Southwest Journal >>

McKnight said he is always amazed at the way the community, especially the community’s veterans, drop everything else they are doing to donate and provide labor for the holiday decorating project. | Public Opinion >>