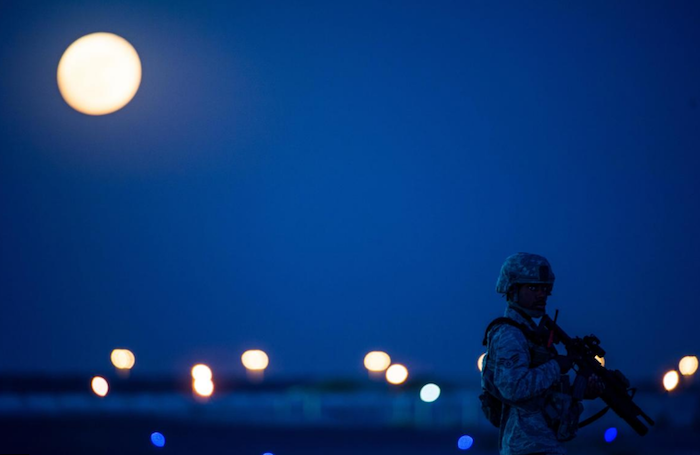 A member of the 380th Air Expeditionary Wing security forces stands on a flight line near a guard tower at an undisclosed location in Southwest Asia on Nov. 14 2016. Behind the airman, a rare supermoon rises in the sky. The moon as not been closer to the Earth since Jan. 26, 1948. Senior Airman Tyler Woodward/Air Force | Military Times >>

Micro-business and self-employment offers veterans, and especially women veterans and veterans with disabilities, increased opportunities to maximize their strengths and skills, to achieve their financial and career goals, and to customize their employment to accommodate their challenges. Self employment creates a job for the business owner and must be recognized as a job creation strategy. | The Huffington Post >>

Brown, who served more than 30 years in the National Guard, told reporters outside Trump Tower in New York after meeting with Mr. Trump that he’s “not competing with anybody” but believes he’s the right man for the job. | CBS News >>

If any of those men are offered the top Pentagon job, they’ll have to obtain a waiver from Congress before they can assume the position. Federal law mandates a seven-year wait between active-duty service and assuming the post of defense secretary, a rule designed to reinforce the concept of civilian control of the military. | Military Times >>

Iraqi Shi’ite militias were massing troops on Monday to cut remaining supply routes to Mosul, Islamic State’s last major stronghold in Iraq, closing in on the road that links the Syrian and Iraqi parts of its self-declared caliphate. | Reuters >>

The attack took place at 12:10 p.m. (2:40 a.m. ET) after a suicide attacker entered Shia mosque Baqir ul-Uloom as religious worshipers gathered to mark the Shia ceremony of Arbaeen, which comes 40 days after the major festival of Ashura. | CNN >>

Mosul is a challenge because it’s the largest city that will have to be liberated and rehabilitated, but we have a lot of experience and the international community has put together a very good team and has been very generous, including the United States in these efforts. | PBS >>

A spokesman for Trump declined to say whether Gabbard is under consideration for a position. “She obviously has a very distinguished track record. But it would be a little premature to start putting out specific potential administration positions,” said Jason Miller on a call Monday morning with reporters. | The Washington Post >>

Aboard the $53 million “game changer” cutter Rollin Fritch, docked Friday at the Coast Guard base here, Donna Fritch Fuller recalled that as a young child, only once did she have the chance to meet her uncle — the namesake of the brand-new ship — and that he had been “good-looking . . . such a kind young man.” | Military.com >>

Fort Gordon is now the site of the Army Cyber Center of Excellence, Cyber School and Signal School. In 2014, the Army’s first Cyber Protection Brigade stood up there. The brigade supports the Army and U.S. Cyber Command by manning, training and equipping its Cyber Protection Teams to conduct defensive operations on joint and Army missions. | Army Times >>

A Marine Corps veteran, Hunter was finally home in time to light Edwardsville’s Warrior Tree this year — a tradition his mother and other military mothers started after he joined the military. | The Citizens’ Voice >>

Student veterans and active duty members in the Dan River Region said their military experiences have helped guide them to their career paths and inspired them to help others. Danville is home to 3,989 veterans, and another 5,218 live in Pittsylvania County. Veterans make up 8.8 percent of the Dan River Region’s population, according to the Census Bureau. | Danville Register & Bee >>

Eddy retired from the Marine Corps at the end of August, the same day as the district’s new food service director, Michael Kelly, retired from the U.S. Coast Guard. As an artilleryman, Eddy shot and transported howitzers on tours in the Helmand province of Afghanistan and Anbar in Iraq. | The Daily Astorian >>