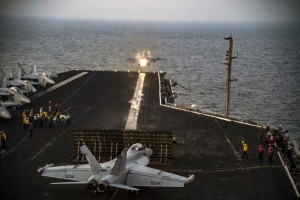 About one-third of veterans who take advantage of the education benefits offered by the Veterans Affairs Department eventually drop out of college or other training certificate program, often overwhelmed by the challenges faced in transitioning from service member to student. | Psych Central >>

The resulting Office of Inspector General report substantiated much of what Suter alleged about wait-time manipulation and misconduct at the Southern Arizona VA Health Care System. | Stars and Stripes >>

Former Massachusetts U.S. Sen. Scott Brown — under consideration for the Cabinet post of Veterans Affairs secretary — said he would create a 24-7 manned hotline for suicidal soldiers, take back bonuses and raises awarded to incompetent VA staffers and outsource PTSD and other serious mental health cases to private professionals. | Boston Herald >>

Iraq will offer three new proposals at a meeting in Vienna this coming week to discuss implementing an OPEC accord to cut output, Iraq’s Oil Minister Jabbar al-Luaibi said late Sunday, in the latest sign the country is inching closer to resolving its differences with the cartel. | The Wall Street Journal >>

In her school in Kabul, a couple of shelves in a closet held a meager supply. There were no books geared to children, but Darwish made do. At age 11, she found a Farsi translation of Dale Carnegie’s “Secrets of Success.” | The Boston Globe >>

In support of that advance, the US-led coalition of more than 60 countries has mounted airstrikes on ISIS facilities, personnel, and infrastructure in northern Iraq since the operation against Mosul kicked off on October 16. | Business Insider >>

Kelly spent more than 40 years in the Marine Corps after enlisting as an infantry Marine in 1970 and then receiving his commission in 1976 after graduating from the University of Massachusetts. He played a central role in largely destroying al-Qaida in western Iraq and later became senior military adviser to then-Defense Secretary Robert Gates. | Marine Corps Times >>

The Army’s culture of sleep deprivation begins during basic training, although the Center for Initial Military Training has taken steps recently to incorporate additional sleep into the platform. It continues through the first unit of assignment, where we interrupt sleep with training and other duties until going without rest becomes ingrained in our soldiers. | Army Times >>

One has to wonder what is going on inside the U.S. Navy. A recent survey of U.S. Navy personnel delivered sobering news to out-going Obama Navy leadership. In arresting phrases, the September 2016 survey found that sailors are “increasingly unhappy with lengthy deployments, high operational tempo, and calls to reduce pay and benefits,” and not interested in being pawns on a political correctness chessboard. That is not what they signed up for. | The Washington Times >>

44-year-old Marine Veteran and resident Brian Gallagher has been hiking with a 30 pound backpack, rain or shine, since Tuesday, Oct. 11, for 2.2 miles every day around the streets of Fairfield in order to raise awareness for a non-profit that supports combat veterans. | The Progress >>

Life got no easier back home in Chester County, where Rodenbeck was forced to live out of his car for about a month. His homelessness late last year into early this year was the result of a landlord missing tax payments on the Malvern property where Rodenbeck was living. | The Philadelphia Inquirer >>

Sawicki has stayed active working with area veterans and is presently serving as the District 7 Commander of the Veterans of Foreign Wars. His responsibility includes managing 40 posts in northeastern Ohio — mainly providing guidance to make sure the posts are running appropriately. | Star Beacon >>