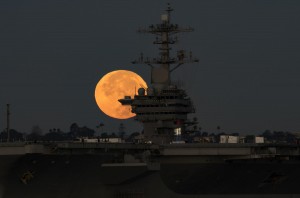 A VA hospital used the technique to get watchdogs and activists to drop their requests after a lone FOIA officer there helped expose corruption by the facility’s director. The director paid the FOIA officer to stay home without access to sensitive information, leaving the facility without anyone to process the requests. | The Daily Caller >>

With the change, Isakson will become the only one of the “big four” congressional VA committee leaders to remain in place in next year. In the House Armed Services Committee, chairman Rep. Jeff Miller, R-Fla., is retiring, and ranking member Rep. Corrine Brown, R-Fla., lost her bid for re-election. | Military Times >>

The state Department of Veterans Affairs sent the letter and located veterans with “bad paper” discharges by using discharge documents it has and data from the State Department of Motor Vehicles to find those still living in the state, Horton said. | The Hartford Courant >>

The battle to retake Mosul from ISIS is being fought by a conglomerate of forces: Iraqi security forces, Kurdish Peshmerga fighters, Sunni Arab tribesmen and Shi’a militiamen. American special forces, as well, are serving alongside Iraqi soldiers in what is described as an advisory role. | Forbes >>

Wednesday’s attack was carried out by a bomber on a motorcycle and targeted a minibus carrying employees of a security unit that is responsible for protecting senior Afghan government officials, similar to the role played by the U.S. Secret Service, the interior ministry said. | The Wall Street Journal >>

Iraqi paramilitary forces have recaptured a strategic airbase outside the northern city of Tal Afar, a spokesman for the Popular Mobilization Forces said. Ahmed al Assadi acknowledged that militia forces have yet to extinguish some pockets of ISIS resistance inside the airbase, however, saying Wednesday night that mopping-up operations will continue for the next few hours. | CNN >>

The Army stood up cyber electromagnetic activity cells that can — by way of challenging capabilities integration work — operate effectively at the tactical level, the cyber director in the Army’s G-3/5/7 division said. Among the key challenges, however, is working through some of the bureaucratic hurdles. | Federal Times >>

“Organizational changes that require a cultural shift can cause friction during transition periods, but [President Barack Obama] has confidence in the decisions made by U.S. Navy leaders and agrees that the benefits in future years will outweigh growing pains in the next several months.” | Navy Times >>

The blast pelvic protector, a lightweight ballistic harness that protects soldiers from underneath, was designed by a team at Natick Soldier Systems Center. It is meant to avoid the multiple surgeries it takes to remove the debris that commonly gets lodged in a soldier’s groin area in the event of a blast. Those wounds are not only painful but can lead to deadly infections. | Army Times >>

Pike enlisted in the Minnesota Army National Guard in May 1988. He continued in that capacity until December 1989 when he enlisted in the regular Army until the spring of 1994. He did a tour of Germany and was stationed at Fort Campbell, Kentucky, then went into the local National Guard unit in Rochester, and retired from there in 2009. | Bluff Country News >>

After two deployments with the U.S. Army, Bruck was working on his MBA and researching different business opportunities. He received a franchise information packet from Visiting Angels, a company that provides personalized in-home care to seniors with more than 500 locations across the country. But he wasn’t interested in spending time at hospitals and other medical facilities. So without really looking into the opportunity further, he left the packet on his floor, where he said it stayed for several months. | Small Business Trends >>

On Saturday, Aug. 20, two dusty hikers emerged from a forestry road near the Brown Mountain Overlook on Highway 181. After weeks on the Mountains to Sea Trail, veterans Jacques and Michelle Revoir were picked up by members of the Newland post of the Veterans of Foreign Wars for some rest and relaxation. | The Avery Journal Times >>