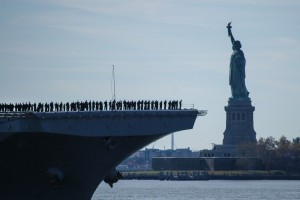 Scattered programs have outsourced VHA care in the past, but a community care option is now a basic expectation for VHA enrollees, a major reform in the direction of veteran empowerment. The VA has itself affirmed that it “alone cannot meet all the healthcare needs of U.S. veterans”. | The Healthcare Blog >>

Chili’s officials apologized to Army Veteran Ernest Walker for the incident and thanked him for his service, Kelli Valade, Chili’s Grill & Bar President, said in a statement. | USA Today >>

More than 1.1 million veteran business owners are over the age of 65, and in 2014, only 4.5 percent of Post-9/11 veterans started a business, according to the Bureau of Labor Statistics. When considering that nearly half of World War II veterans and 40 percent of Korean War veterans started businesses, the differences are stark. | Military Times >>

The suddenly vacated cabinet positions, adding to two ministries already vacant because of resignations, will further bog down the work of a government that has struggled to get its house in order while also facing emboldened Taliban offensives and decreasing support across the country. | The New York Times >>

Interior Ministry spokesman Saad Maan said on Tuesday that Iraqi forces in the east of the city, which also include part of a tank division, had dislodged Islamic State fighters from a third of the eastern side of the city. | Reuters >>

“Countrywide, in the last decade nearly every year has seen either flooding or drought,” Mohammad Salim, an expert at the United Nations Development Programs agency said. “And if the current trends continue, droughts will become the new normal.” | Yahoo >>

A minor crack was discovered in an Excalibur projectile’s high-explosive material inside the warhead during routine stockpile surveillance testing. The problematic projectile was manufactured in 2007, but the Army subsequently found more cracks in newer production munitions as well, according to Audra Calloway, a spokeswoman at Picatinny Arsenal, home of the Excalibur program office. | Defense News >>

Federal authorities deferred a final decision on a controversial North Dakota section of the Dakota Access Pipeline on Monday in a statement that highlighted concerns about the “repeated” dispossession of tribal lands in the country’s past. | Fortune >>

The suit against the U.S. Government, filed by Bitmanagement Software in July, alleges that the Navy copied and installed the company’s virtual reality software on hundreds of thousands of computers for which it does not have a license. The Navy was authorized to install the software on just 38 computers for testing, trial runs and integration with other Navy systems, the suit says. | Fox News >>

Even if not dealing with post-traumatic stress or other conditions caused by their service, many veterans, Wieseler said, just have a hard time adjusting to civilian life. They’re used to being told what to do and when. Without that direction, some sit at home and feel isolated. | Wisconsin State Farmer >>

Roman Baca, a U.S. Marine Corps Iraq war veteran, is artistic director and general manager at West Hartford’s Ballet Theatre Company. After his time serving in Iraq, Baca turned to his background in ballet for healing. | The Hartford Courant >>

“Every time he looks at the photo and thinks of Connie, he thinks of peace during wartime,” said Pat Bell-Demers, executive director of the Sonoran Arts League. “It was an opportunity to escape the situations of war when he was in Afghanistan and he would just focus on the dog.” | Downtown Devil >>