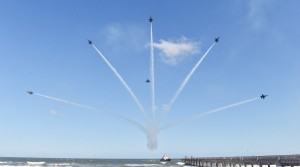 More veterans of the wars in Iraq and Afghanistan are headed to Capitol Hill next year, despite an overall drop in the number of representatives and senators with military experience. At least 27 veterans of the recent wars won congressional races on Tuesday night, with a handful of races still in the balance. The current Congress includes 26 veterans with time in those two war zones. | Military Times >>

An agency employee told The Associated Press that he is the person who emailed the information to himself, describing it as unauthorized wait lists used by VA health care facilities in Colorado. The employee, who spoke on condition of anonymity because he fears retaliation, said he wanted to document the lists because they could have been used to conceal lengthy delays in providing care. | ABC News >>

U.S. Central Command on Wednesday released a statement saying two dozen airstrikes launched by American warplanes and meant to target militants affiliated with the Islamic State of Iraq and Syria, or ISIS, may have “regrettably” struck civilians instead. | Military.com >>

The operation to liberate the Iraqi city of Mosul marks the beginning of the end of the Islamic State group’s so-called caliphate in Iraq, the U.N. envoy for the country told the Security Council on Wednesday. | Military Times >>

The memorable cover photo depicting Gula, at about 12 years old, was taken at a refugee camp in Pakistan in 1984. As NPR’s Philip Reeves has reported, Gula has spent most of her life outside Afghanistan after her parents were killed in a Soviet airstrike. | NPR >>

“We’ll always have to maintain high standards. At the same time, these benchmarks must be kept relevant for both today’s force and tomorrow’s, meaning we have to ensure that they’re not unnecessarily restricted.” | Fox News >>

“They are the rightful heirs to the 241 years of Marines who preceded them,” Mabus said. “The Marine Corps is the most powerful expeditionary fighting force the world has ever known, and they’re the reason. It’s their responsibility to make sure that never changes.” | WNCT >>

President-elect Donald Trump believes the the Obama administration has weakened the American military. He campaigned on a promise of greater security, particularly against terrorism. | Forbes >>

Nearly 12 years to the day after a rocket-propelled grenade downed the Army helicopter she was co-piloting over Iraq, Tammy Duckworth prepared Wednesday to become Illinois’ next junior U.S. senator, recapturing for Democrats the seat once held by President Barack Obama. | Task and Purpose >>

“PTSD is a lot like deafness. It is an invisible disability,” said Ken Kirsch, the service dog training director who developed the PTSD program for America’s VetDogs. “The purpose of the service dogs is to mitigate the disability, so that the person can live a normal or near normal life.” | The TODAY Show >>

The 37-year-old former Navy SEAL and combat medic had 10 years in Iraq, Afghanistan and other conflict zones. Then he spent four years as a paramilitary operative. “Going to war doesn’t make you a victim,” he says. | The Wall Street Journal >>