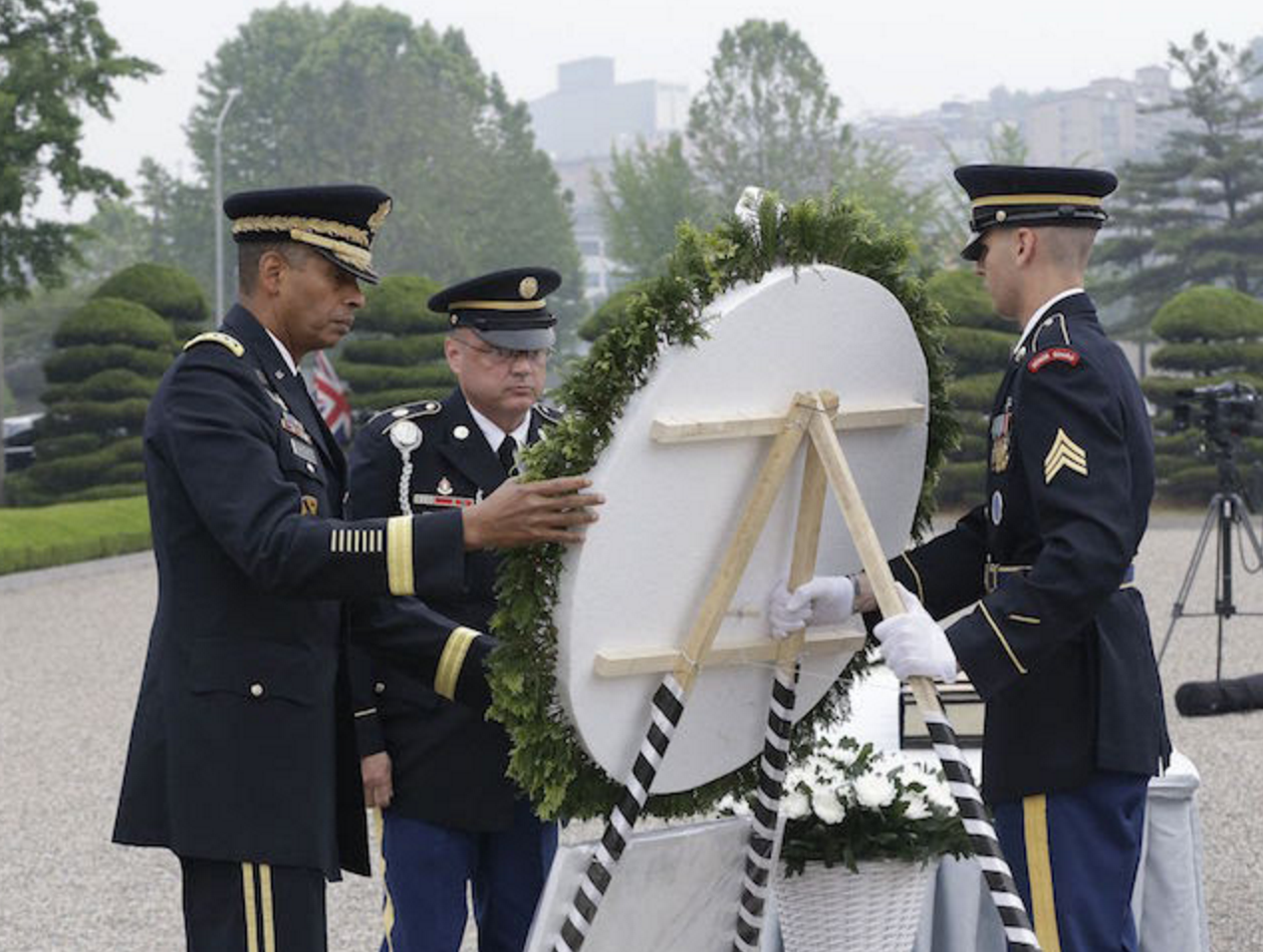 On his last Memorial Day as president, Mr. Obama laid a wreath Monday at the Tomb of the Unknowns to honor members of the military who died serving their country. His appearance at Arlington National Cemetery carries on a longstanding presidential tradition and comes as the U.S. struggles to end various conflicts in the Middle East. In his remarks, the president referred to those laid to rest at Arlington and their families “the best of us,” and he called on Americans to honor the fallen by caring for those they leave behind – their families and their battle buddies who come home. | CBS News >>

If Vietnam veteran and activist Jan Scruggs has his way, one day there will be a memorial on the National Mall in Washington, D.C., to honor living veterans as well as those killed in Iraq and Afghanistan. “We have to memorialize the troops, remember those serving, certainly remember those who gave their lives,” Scruggs told the MilitaryTimes last year. | L.A. Times >>

When she came home in 2013, she jumped at the chance to get free treatment for post-traumatic stress through a pilot program for a therapy called EMDR, which uses sensory stimulation to connect to triggers from trauma and neutralizes them. After several sessions, she said it worked. “I’ve never been a therapy type of person, but it worked because it was a different kind of therapy, and I didn’t have to do too much of the talking,” Helmer said. | Minneapolis Star-Tribune >>

President Obama’s remarks at Arlington National Cemetery on Monday focused on the three American service members who were killed fighting the Islamic State militant group in Iraq. This time, Obama left no doubt that the missions that took their lives involved combat. | Washington Post >>

Iraqi pro-government forces surrounded Fallujah on Sunday and took control of almost all entrances to the city, in preparation for the next phase of their week-long effort to seize it back from Islamic State. | L.A. Times >>

More than 50 Afghan police have been reported killed over the past two days in heavy fighting around the capital of the southern province of Helmand, officials said on Monday. | Reuters >>

History has not been kind to Army Pfc. George Burns or Marine Sgt. Louis Burmeister. Both military photographers were on Mount Suribachi on Feb. 23, 1945, when six U.S. warriors raised the Stars and Stripes to alert the world that the bloody battle of Iwo Jima was all but won. And both claimed they took their own versions of the iconic shot that won Associated Press photographer Joe Rosenthal a Pulitzer Prize. | NBC News >>

Schools across the country are preparing to formally track students from military families, monitoring their academic progress as they move from military base to military base and state to state, under a new provision in the federal education law. | AP >>

Every day is Memorial Day for the members of the Army’s Old Guard that escorts remains to their final resting places at Arlington Cemetery. Accompany them on one mission. | Military Times >>

Maximilian Uriarte decided to become a U.S. Marine because he wanted to “experience something crazy” in Iraq. “And so for me, it was like, ‘What’s the quickest way I can get to Iraq?’ And that is, join the Marine Corps and infantry,” Uriarte said. “As soon as I got off that bus… there was a dude screaming in my face. I was like, ‘What did I do? This is a terrible idea.'” You may not recognize Uriarte, but military men and women around the world know the characters he created in his comic strip, “Terminal Lance.” | CBS News >>

After nearly losing his life during a military operation in Afghanistan in 2004, Stephan Cochran didn’t know if he’d ever walk again, let alone resume a promising career in country music. He faced depression and suicidal thoughts after his back was broken and legs immobilized as a result of being tossed from a military convoy vehicle. But after putting a shotgun to his face in 2009, he changed his mind and turned a corner. | The Detroit News >>

This former Marine is looking for a few good men and women to mentor New York City kids. Diego Romero, who once recruited Marines, is now recruiting veterans to guide youngsters for Big Brothers Big Sisters of NYC. The nonprofit matches at-risk kids from around the five boroughs with role models to help them navigate school and life. | New York Daily News >>