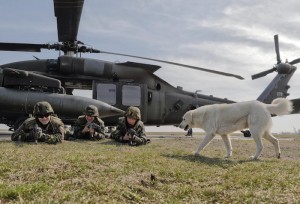 The U.S. Department of Veterans Affairs (VA) is providing a new option to help fight the disorder called Repetitive Transcranial Magnetic Stimulation, or rTMS therapy. It’s a device that uses an electromagnet charged with electricity that is applied to specific points on the patient’s head. The powerful magnetic field can then affect the brain cells of the person suffering from depression. | Fox News >>

The news from Afghanistan lately has been grim, a record number of civilian casualties last year. And yesterday, suicide bombers and gunmen dressed as doctors stormed a military hospital in Kabul. | NPR >>

Suicide bombers struck a village north of Baghdad as a wedding party gathered in the evening, killing at least 26 people and wounding scores, a government spokesman said on Thursday. | The New York Times >>

The death toll from an attack on a military hospital in Kabul by gunmen dressed as medics has risen to 49 with dozens wounded, a senior health official said on Thursday. Salim Rassouli, director of Kabul hospitals, said 49 people had been killed in the attack on the Sardar Mohammad Khan military hospital on Wednesday, with at least 63 wounded. | Reuters >>

Hundreds of Marines, mostly on active duty, are being investigated for circulating on Facebook photos of unclad women, including fellow Marines, without their consent. These Marines, part of a Facebook group called Marines United, also posted plans for stalking and harassing women in those photos. | The New York Times >>

There’s a pint-sized pup preparing to sniff out drugs on the world’s largest naval base. Meet Puskos, a 15-pound Jagdterrier who is about a fifth the size of a typical military working dog at Naval Station Norfolk. “He’s crazy. He’s hyper. He’s always going 100 percent, 24-7,” said Puskos’ handler, Petty Officer 2nd Class Jordyn Japec. “He just wants to work. … There’s no stopping him. He has no fear.” | The Virginian-Pilot >>

Those are his physical wounds, but his mental wounds, including post-traumatic stress disorder (PTSD), took over his life until Army veteran Blake Rashad gave him 140-pound Cava. Cava is a young black Russian terrier service dog.n“He has given me a reason to talk to other people. Before I had him, I was in and out of places and didn’t want to talk with you or people,” Mathis told Lucie. Blake Rashad started the Top Dogg K-9 Foundation with his wife, Sheila, with the goal of giving man’s best friend to as many veterans as possible. | WSB-TV 2 Atlanta >>

Four years ago, Zack Cleghorn was living in his car. After returning home from a seven-year tour as a Marine in Japan, Afghanistan and the U.S., Cleghorn worked as a car salesman for several months to make ends meet. But he struggled with PTSD and depression. “There was a time I didn’t want to wake up in the morning,” says Cleghorn, 28.  | USA Today >>

Rebecca Beaulieu started a non-profit that seeks to give disabled veterans purposeful work and a potential economic path. With her husband Ken, who served as a hospital corpsman, Beaulieu decided farming could help veterans find their place in society. Coming home from the service, Ken was disabled and could not re-enter the work force. He served in the Navy and was part of the relief effort in Haiti after the 2010 earthquake. | New Hampshire Union Leader >>