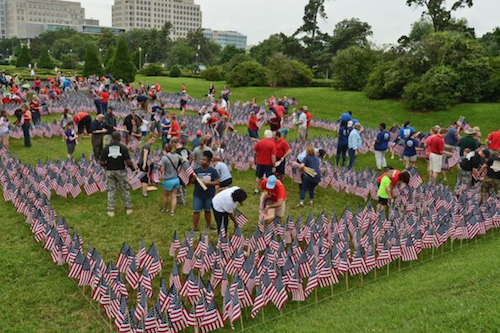 Volunteers and members of the Louisiana National Guard place more than 11,000 American flags at the State Capitol in Baton Rouge to honor Louisiana’s fallen service members after completing a six-mile ruck march on May 27 from the LSU Memorial Tower to the steps of the Capitol building. Master Sgt. Toby Valadie/Air National Guard. | Military Times >>

There were “systemic failures” by the federal agency charged with independently investigating complaints at a western Wisconsin Veterans Affairs medical facility known as “Candy Land” because of the free flow of prescription drugs, a U.S. Senate committee probe released Tuesday determined. | Associated Press >>

After a 25-year-old veteran was identified by ABC station KTRK-TV as the alleged gunman behind a deadly shooting in west Houston, the young man’s devastated stepmother told ABC News, “I think he was haunted by everything he experienced” in Afghanistan. | ABC News >>

Donald Trump on Tuesday announced he’d given away the last $1.5 million that other donors had entrusted to him four months earlier, when Trump held a televised benefit for veterans’ charities. | The Washington Post >>

The Taliban killed nine people and abducted 35 more in a series of bus attacks in the northeastern province of Kunduz on the same day that a leading humanitarian organization released a report revealing that the number of afghans internally displaced has doubled in the last three years to 1.2 million because of fighting and attacks. | Vice >>

Iraqi special forces battling their way into Fallujah faced fierce counterattacks by Islamic State, with commanders of the operation warning that heavily booby-trapped streets in and around the city were hindering the advance. | The Wall Street Journal >>

Amid the city’s swirling winds, construction crews work steadily to create a new downtown strip that, someday, will include high-rise office towers and thousands of new homes. | Washington Post >>

The Navy’s newest and most transformative weapon, known as a railgun, is getting closer to deployment. Long confined to the speculative pages of science fiction novels, railguns use electromagnets to propel hardened projectiles at 4,500 miles an hour, and can destroy heavily armored targets at a range of up to 125 miles. | Fortune >>

As sometimes happens in rural America, someone has shot up a road sign. Given the gape of the hole and the fact that the road traverses Aberdeen Proving Ground, there’s a good chance it wasn’t made by a bullet. | New York Times >>

After a ceremony held Monday, the Delaware National Guard headquarters is now officially named the “Major Joseph R. ‘Beau’ Biden III National Guard and Reserve Center. The event was held on Memorial day, a day to honor those who gave their life for their country. | WMDT >>

Some pushed one leg in front of the other, rigid little robots just trying to stay upright. Others waved their sticks at pucks, sometimes hitting them, sometimes whiffing. A small boy melted into tears each time his father gently placed the helmet cage over his head. | The Morning Call >>

“When you get out, you get a three-day class about how to write a resume and what your options are,” he recalled. “You’re 22 years old. All you’re thinking about is packing your stuff and going through the checklist of what’s required to get out.” | Boston Globe >>

Other than the extra years of maturity he wears on his face, Tehuti Miles does his best to blend seamlessly into the Maryland football locker room. He has learned not to make any noise and how to hide the panic on his face when an unexpected noise or a random train of thought takes him on a wrong turn down memory lane. | ESPN >>