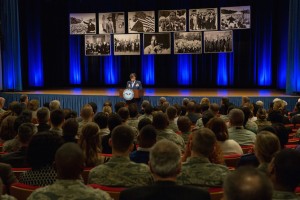 Most of the Cabinet-level confirmation hearings are already finished, but the nominee to take over the Department of Veterans Affairs hasn’t had his chance yet to face Senate scrutiny. That changes this week, as VA Under Secretary for Health Dr. David Shulkin goes before the Senate Veterans’ Affairs Committee on Wednesday to answer questions about how he plans to manage the bureaucracy and implement the reforms outlined by President Trump. | Military Times >>

Veterans voted for Donald Trump over Hillary Clinton by a 2-to-1 margin back in November. But a couple of changes that the new administration has underway are likely to put a particular squeeze on former service members’ health care. | Money Magazine >>

Bart Zagami was running out of options to treat his lymphoma when a cancer trial for the drug ibrutinib gave him new hope. In the days following the terrorist attack in New York on Sept. 11, 2001, Bart Zagami spent his time at Ground Zero helping with the task of rescue and recovery. | Healthline >>

Military veterans were dumbfounded and furious when it became clear over the weekend that President Donald Trump’s executive order barring the admission into the United States of people from seven majority-Muslim countries keeps out interpreters who’d risked their lives helping U.S. forces in Iraq. | Miami Herald >>

The Taliban controlled the nearby streets and bullets were popping in the dark when Dr. Marzia Salam Yaftali’s neighbors in Kunduz City turned to her for help. Their relative had gone into labor with twins and was having trouble, the streets to the hospital were blocked, and Dr. Yaftali was their best hope. With urban battle all around, she took the risk of leaving her two young children at home to try to save three lives. | The New York Times >>

Iraq retaliated Monday against President Trump’s executive order banning its nationals from entering the United States for 90 days by approving a “reciprocity measure” that will apply to Americans seeking admission to the country. The counter-move was adopted by Iraq’s parliament, although it was not clear to what extent it would apply to aid workers, oil company executives and other key workers who routinely do business in Iraq. | USA Today >>

President Donald Trump on Saturday ordered military leaders to give him a report in 30 days that outlines a new strategy for defeating the Islamic State terrorist group. “This is the plan to defeat the Islamic State of Iraq and Syria, in other words ISIS,” he said as he signed the order. “I think it’s going to be very successful. That’s big stuff.” | Military.com >>

The United States deployed thousands of soldiers and heavy weaponry to Poland, the Baltic states and southeastern Europe on Monday in its biggest buildup since the Cold War, condemned by Russia as part of an aggressive strategy on its frontiers. The deployment of a full armored brigade, returning U.S. tanks to Europe for the first time since 2013, offers reassurance of U.S. support for east European allies alarmed by Moscow’s military assertiveness towards Ukraine, in the south, and by Russian air, land and sea exercises in the Baltic region.  | Reuters >>

Philippine President Rodrigo Duterte asked the United States on Sunday not to store weapons in local camps under a defense pact, saying his country may get entangled if fighting erupts between China and the U.S. Duterte said in a news conference that he would consider abrogating a 2014 defense pact that allows U.S. forces to temporarily station in designated Philippine camps if the Americans build weapon depots in those encampments. | Military Times >>

Gettysburg National Military Park’s artist-in-residence for January and February is Nicholas Collier, a U.S. Military veteran who will pursue photography, sculpture and filmmaking during his residency. Collier received his Bachelor of Fine Arts in 2012 from George Mason University in Virginia and his Master of Fine Arts in 2016 from Florida State University. | Herald-Mail Media >>

Over 80 people gathered inside the Michigan Union Rogel Ballroom Friday night to listen to Matt Gallagher, former U.S. Army Captain and critically acclaimed author, recount his experiences in the Iraq War as a part of the 8th Annual Student Veterans of America at the University of Michigan Benefit Dinner.  | Michigan Daily >>

A California veteran is ripping up the slopes, even though he’s visually impaired. Sergio Monzon can’t see very well due to a traumatic brain injury he suffered while serving as a Marine in Fallujah, Iraq. “I have double and blurred vision and I have no depth perception and I lose my vision in low light,” he said. | WTOL 11 >>