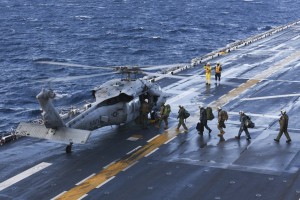 Hours after the White House said that President Trump’s freeze on federal hiring would include the Department of Veterans Affairs, the agency clarified that it plans to continue hiring for jobs with public safety missions. “The Department of Veterans Affairs intends to exempt anyone it deems necessary for public safety, including frontline caregivers,” Robert Snyder, VA’s acting secretary, said in a statement Wednesday. | The Washington Post >>

President Donald Trump’s hiring freeze at the Department of Veterans Affairs appeared to put him at odds with his own nominee to head the VA, Dr. David Shulkin. Shulkin, currently chief executive of the Veterans Health Administration, has repeatedly cited the need to hire more caregivers at the VA to cut wait times. In addition, the acting head of the VA, Robert Snyder, said Tuesday that he was looking for ways around the Trump freeze. | Military.com >>

President Trump says he wants a swift and complete victory over the Islamic State, and he inherits the battle at a moment when the extremist group is losing ground in Iraq and Syria. The group’s self-declared caliphate is looking increasingly fragile. Could 2017 be the year the U.S. and its allies break the back of ISIS? | NPR >>

An Afghan official says a suicide bomber wounded four people in the eastern city of Ghazni when his explosive device exploded prematurely. Deputy police chief Asadullah Shujaye said the attacker could have caused much greater harm if he had reached a crowded market nearby. | ABC News >>

Wednesday, America’s war against ISIS came to a dead stop on the banks of the Tigris River that slices Mosul in half. ISIS holds the high ground on the western side of the river firing constant mortars towards Iraqi troops on the other. Maj. Arkan Hashm said ISIS was launching the rounds from a school. | CBS News >>

President Trump has selected longtime private equity fund manager Philip Bilden to be the next secretary of the Navy, the White House announced Wednesday. Bilden, who ran the Hong Kong branch of the private equity firm HarbourVest Partners since 1996 before recently stepping down, was floated by the Trump transition team as a candidate for the job earlier this month, according to a report from the U.S. Naval Institute. | The Washington Post >>

Ten months ago I traveled to Detroit with another veteran to attend the Republican debate between three politicians and a seasoned businessman named Donald J. Trump. Over the course of the next several months, I would follow the campaign of Mr. Trump — attending three of his rallies, and two rallies of his running mate Mike Pence. | Military Times >>

The decision to integrate female service members into combat arms units has some worried that it might lead to a spike in incidents of sexual assault. A bunch of men and women cozying up over bowls of chili mac in the woods, drenched in rain and mud and misery, miles from civilization. Something is bound to happen — or so the theory goes. | Task & Purpose >>

Gabriel Gehr exudes a confidence and positivity that’s apparent from the moment you meet him. Gehr is currently a second-year liberal studies major at San Diego State University, aspiring to become a middle school science teacher. He is also a classified Paralympic swimmer who recently broke 10 Paralympic swimming records over the course of just three weeks. | SDSU News Center >>

Rob Peal, a former marine and now partner at Neal and Harwell law firm, got a call from his cousin, Martin Hampton, also a former marine and now local firefighter, a few months ago. He had an idea of how to give back to those who were injured while or after serving our country. Peal served in Iraq and Afghanistan and told his cousin why he was interested in helping out. | WKRN Nashville >>

For 12 years, veteran Corey Tibbets safeguarded the dog tags of Lance Cpl. Hector Ramos, who was killed when his helicopter crashed in Iraq in 2005. Tibbets was part of the first unit on the scene, and when he found the dog tags, he made a promise to himself that he would one day get them to the fallen soldier’s family. | The Week Magazine >>