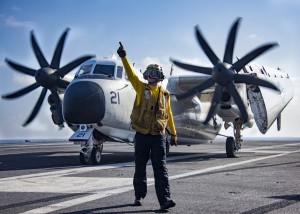 In response to concerns that the Department of Veterans Affairs (VA) has faced about veterans’ access to care and the quality of care delivered, Congress enacted the Veterans Access, Choice, and Accountability Act of 2014 (“Veterans Choice Act”) in August 2014. The law was passed to help address access issues by expanding the criteria through which veterans can seek care from civilian providers. | RAND Corporation >>

As promised, President Trump has moved to dismantle the Affordable Care Act. It’s a concern for those who might be left without health insurance — and especially for the Department of Veterans Affairs, which may have to pick up some of the slack. | NPR >>

A hiring freeze imposed Monday on federal agencies by President Donald Trump could affect veterans seeking government jobs and others who rely on health care from the Department of Veterans Affairs, a researcher and union leader said Tuesday. | Stars and Stripes >>

Nearly 2,400 American service member have died during the war in Afghanistan. Along with so many of its sons and daughters, taxpayers sacrificed almost a $1 trillion to hold the country since 2001. Not all that cash went to war, of course. The United States spent around $115 billion of it to reconstruct a country the Taliban had ravaged. | Task & Purpose >>

After three months of fighting, the battle to retake Mosul has entered a new chapter, but the Islamic State’s vast arsenal of car bombs and suicide vests is far from spent and most of the civilian population is still trapped. By Friday, the government forces had pushed the militants across the Tigris River, which divides the city. | The New York Times >>

The United States will send extra military aircraft to Australia’s tropical north this year, a U.S. Marine Corps spokesman said on Wednesday, bolstering its military presence close to the disputed South China Sea. The Marines’ deployment in the strategic city of Darwin, agreed in 2011, was a critical part of former U.S. President Barack Obama’s “pivot” to Asia amid China’s increased assertiveness in the region. | Reuters >>

President Donald Trump’s choice for the next Air Force secretary could be a signal to troops that neither he nor Defense Secretary James Mattis intend to impose a ban on women in combat. Heather Wilson, a former congresswoman and Air Force Academy graduate, hasn’t directly advocated for women on the front lines — indeed, she once raised doubts about lifting the ban on female troops serving in direct combat arms positions. | Military.com >>

The world’s first nuclear-powered aircraft carrier will be decommissioned next week in what will be the final farewell to a warship that has played a role in major world events from the 1962 Cuban Missile Crisis to the recent wars in Iraq and Afghanistan. | Virginian-Pilot >>

The City Council voted 5-4 to adopt what is known as the “all veterans’ tax credit,” after a long debate on the issue Monday. City Councilor Josh Denton, a U.S. Army veteran who saw action in Iraq, said he is “very excited” about how the vote went. “On a personal level this is a big achievement to me. When I worked for Carol Shea-Porter as a veteran’s liaison, this was the number one issue I’d always be asked about,” Denton said Tuesday. | Sea Coast Online >>

A veteran who has decided to make Chicago home after years of service is creating an app to help other vets like himself. The Victor app is somewhat of a one-stop shop for vets. It will be free for active military, veterans and their immediate families. The Humboldt Park man behind it all has passion for helping others and a love for this city. | ABC7 Chicago >>

An Army veteran, Yagovane said he’s met many people, veterans and others, who’ve encountered barriers in their lives because of some sort of disability. “Take the guy who lost his leg overseas, for example — he can still work, and our goal is to help him find a job,” Yagovane said. | New Haven Register News >>