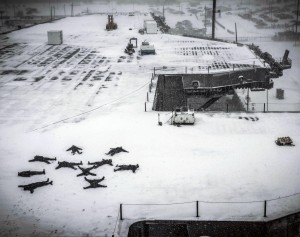 “His selection is unprecedented. Our membership overwhelmingly supported the selection of a veteran for this critical leadership position,” Rieckhoff said. “Dr. Shulkin’s service as Under Secretary is respected by the entire veterans community. He is a committed leader and is our best hope among candidates reported in the media to maintain the momentum created by Secretary McDonald to reform the VA,” he said. | CNN >>

Veterans health care remains a “high risk” issue threatening the federal budget and quality of care for former service members, auditors say in a forthcoming report. The nonpartisan Government Accountability Office will place the Veteran Affairs Department’s health system once again on its “high risk” list when it’s released next month. Issued every two years, the list identifies troubled federal programs that could cause significant problems due to waste, fraud, mismanagement or structural flaws. | The New York Times >>

Almost three years after long waits for medical appointments for veterans exploded into a nationwide scandal, the Phoenix VA hospital at the center of the crisis still is not providing timely care, a watchdog group documented Monday. Special Counsel Carolyn Lerner, whose office represents whistleblowers and investigates their claims, wrote in a letter to President Obama that two independent reviews have confirmed many allegations brought by a doctor at the Phoenix facility. | The Washington Post >>

The United Arab Emirates said on Wednesday that five of its diplomats were killed in a bombing in southern Afghanistan the day before, the deadliest attack to ever target the young nation’s diplomatic corps. The federation of seven sheikhdoms, founded in 1971 on the Arabian Peninsula, said it would immediately fly the nation’s flag at half-staff for three days in honor of the dead from the attack Tuesday in Kandahar, which killed at least 11 people. | Fox News >>

A top Iraqi commander told The Associated Press that the operation to retake the city of Mosul from the Islamic State group could be complete in three months or less. “It’s possible” that Mosul will be liberated in in that time frame, Lt. Gen. Talib Shaghati said in an interview with the AP on Tuesday evening. However, he warned it is difficult to give an accurate estimate of how long the operation will take because it is not a conventional fight. | The Washington Post >>

Afghanistan needs a stable security environment to prevent it from again becoming a safe haven for al-Qaida and other militants, but Afghan security forces have not yet become capable of securing all of the country by themselves, a U.S. report said Wednesday. The report, by the U.S. government’s Special Inspector General for Afghanistan, offered a high-risk list assessment for the war-torn country, two years after NATO-led foreign combat forces pulled out at the end of 2014, leaving only a smaller training and assisting mission behind. | Military Times >>

At the Surface Navy Association’s annual symposium near the nation’s capital this week, one phrase is dominating discussions of strategy: distributed lethality. Distributed lethality is a plan to assure U.S. sea control in coming years by dispersing rather than concentrating naval forces, relying on new weapons, sensors, training and tactics to defeat potential aggressors. | Forbes >>

Even as the future of the A-10 hangs in the balance, nearly two dozen Warthogs recently received upgrades to enhance their combat search and rescue capabilities, a need described as “urgent” by one Air Force official, according to an Air Force statement. A new recovery system has been installed on 19 A-10C Thunderbolts assigned to Davis-Monthan and Moody Air Force bases in the United States in the past three months, the Air Force said in a statement Friday. | Task and Purpose >>

An elite team of American commandos killed a senior leader of ISIS this week, giving President Obama another name to scratch off his list of top terrorists in the final days of his presidency. Abu Anas al-Iraqi, said to be the finance chief of ISIS, was killed Sunday in an operation in Syria by an intelligence-driven U.S. special operations unit known as the Expeditionary Targeting Force, a counterterrorism official told ABC News. | ABC News >>

Cassie Winslow, outreach coordinator for Grace After Fire and a retired Marine Corps staff sergeant, said she hoped the veterans who attended the event would enjoy a day of pampering. “A lot of women veterans are really awful at taking care of themselves,” Winslow said. “Self-care is really important, and we want them to know it’s okay to take time for yourself.” In addition to the salon services, photographs, and resume and wardrobe help, KCAL automotive technology students offered free oil changes and tire rotations. Culinary arts students from across the district supplied boxed dinners for participants to take home. KCAL graphic design students created fliers, online advertisements and signs. | Fort Worth Star-Telegram >>

Chris Nolte, founder of Brooklyn-based Propel Bikes, returned home from the Iraq war with a painful injury. A back wound kept him from pursuing his lifelong passion – riding bikes. He later found that he could ride comfortably again thanks to electric-assist bike technology. Now, as a veteran entrepreneur, Nolte helps others with physical limitations experience the joy of cycling. | Entrepreneur >>

Andrew Leonard opened a business, Liminal Warrior, in August 2016, and has created many gorgeous, hand-crafted wooden flags in his shop in Carroll. His reasoning behind starting the business is a bit different from most entrepreneurs. Leonard served for eight-years in the Air Force and donates 60 percent of his proceeds to charity, in particular, through one organization dedicated to helping disabled veterans. | CBC Online >>