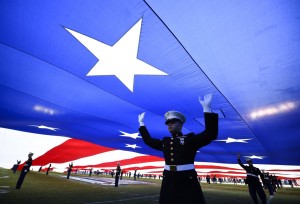 Of all the day-to-day operations of government that Trump railed against during his campaign, VA, an agency reeling from scandal, came under special scrutiny. Its management challenges are vast, and the president-elect’s promises to veterans to remake it daunting. | The Washington Post >>

The unemployment rate for Afghanistan- and Iraq-era veterans dropped to 5.7 percent in December, according to information released Friday by the Bureau of Labor Statistics. The rate was down from November’s 6.5 percent, which was a jump from the 4.7 percent unemployment rate in October. | Military Times >>

The findings are the result of an investigation by the VA inspector general’s office into how the department was using funds to attract and retain employees. Inspectors initiated the investigation after allegations that the department was giving out too many incentives to VA executives without cause – a charge Republican lawmakers and VA leaders have quarreled about in recent years. | Task and Purpose >>

When Ashti Hawrami, the oil minister from Iraq’s largely autonomous Kurdistan region, unfurled a map of untapped oil fields for a team of ExxonMobil officials in the spring of 2011, they saw possibility and profit. | The Washington Post >>

The Marines’ commander, Brigadier General Roger Turner, admitted to CBS News, however, that it is a high-risk mission and the American troops will encounter the full spectrum threat from the Taliban insurgency. | CBS News >>

Iraqi leaders say they doubt their forces will oust Islamic State fighters from Mosul — the terror group’s last major urban stronghold in Iraq — before Easter, despite a spurt of progress in recent days that saw the troops reach the Tigris River for the first time in the battle for the city. | Voice of America >>

“Rarely, if ever, do they respond verbally,” said Brig. Gen. Charles Corcoran, commander of the 380th Air Expeditionary Wing, who flies combat missions in a stealth fighter. “Rarely, if ever, do they move. We get out of the way. We don’t know what they can see or not see, and we don’t want them running into one of us.” | The Wall Street Journal >>

The military fires hundreds of thousands of rounds during training, ranging from bullets to 155mm artillery shells. While casings are collected, and often recycled, the bullets themselves generally aren’t, and can take “hundreds of years” to break down in the environment. That can pollute the soil and water supply, harm animals, and generally look like crap if you stumble upon them. | Engadget >>

The troops, who landed on helicopters, spent about 90 minutes in the area, then left carrying Islamic State captives and bodies, according to witnesses quoted by the website Deir al-Zour 24, which monitors Islamic State activity in that province. | The Washington Post >>

So it made sense to Shane Kruchten, a Marine combat veteran who began his pro MMA career in 2007, that he heard cheers as he landed shots to opponent Jeremy Mahon during their New Year’s Eve bout in New York City, part of a World Series of Fighting card. | Military Times >>

An army veteran spent more than eight years living with life-altering pain from spine damage he suffered in Iraq. Doctors kept telling him he was too young for surgery to fix the problem, so he just lived with pain and numbness. He gained weight and lost mobility until his wife gave him the number of a spine surgeon who changed his life. | WNDU >>

“Being there and getting close enough to draw sketches on sniper fire allowed me to absorb the emotional terror,” he said. “There were times when you had sniper fire and you had to quickly determine where it was coming from,” Mumford said. “As an artist, you knew you were a target. You had to stay protected.” | The News-Times >>