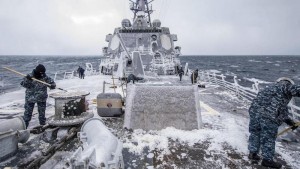 Sailors clear snow and ice from the forecastle of the USS McCampbell in the Sea of Japan, Feb. 3rd, 2017. PO2 Jeremy Graham/Navy | Military Times >>

Many of the proposals to provide veterans more choice in their health care could wind up cutting them off entirely. After three years of crisis and controversy, the Department of Veterans Affairs has reached a watershed moment, and decisions about how to strengthen and reform its health care system must be made this year. | Task & Purpose >>

“Veterans are getting to the point where they’re frustrated, and — whether it’s scheduling, whether it’s electronic medical records, whether it’s benefits payments or smoothing out how we do the GI Bill — all of those things fall under the umbrella of [information technology],” said Rep. Tim Walz, D-Minn., the top Democrat on the committee. “It’s the fundamental piece that ties all of the aspects of the VA together.” | Stars & Stripes >>

Afghanistan, America’s longest military fight, is getting little attention so far from the Trump administration despite the protracted struggle to rein in the Taliban and battle a stubborn Islamic State affiliate there. The conflict, now in its 16th year, got only a peripheral mention during President Donald Trump’s visit Monday to U.S. Central Command, which oversees the conflicts in the Middle East. | The Washington Post >>

The U.S.-led coalition is training 3,000 Iraqi police and border officers to help provide security in Iraq once Islamic State militants are pushed out of their last major stronghold in Mosul. | USA Today >>

Six employees of the International Committee of the Red Cross were killed and two others were missing after an attack in northern Afghanistan on Wednesday that officials attributed to local affiliates of the Islamic State. | The New York Times >>

The US military’s uniformed No. 2s on Tuesday warned that readiness accounts, starved by years of budget instability, are in urgent need of relief. The vice chiefs of America’s armed forces said their personnel and aging equipment are stretched thin amid years of war, statutory budget caps and temporary workarounds, end-strength cuts, and Congress passing nine consecutive continuing resolutions. | Defense News >>

Years of budget cuts have taken a toll on the Navy’s fleet of strike fighters. Nearly two-thirds of the Navy’s strike fighters are sitting unused because there is not enough money to repair them, according to DefenseNews.com. The Navy has had to deal with declining budgets in recent years even though the demand for military aircrafts carriers remains the same. Congress was unable to produce a budget before the October 1 start of the 2017 fiscal year. | Fox News >>

After a deployment to Afghanistan and nearly four full years in the military, he needed to find a new career — and decided, after many talks with Tito’s Handmade Vodka founder Tito Beveridge and Sweet Leaf Tea and Deep Eddy Vodka founder Clayton Christopher, that owning a brewery in Austin would bring him the most satisfaction. “It seemed like a career you were passionate about wasn’t about the money,” he said. | Austin American-Statesman >>

He spoke recently as part of a panel addressing the hiring of veterans during the 2nd Annual Kentucky Workforce Summit, sharing with the group his experiences after he found out that he would be receiving a medical discharge. Ervin noted that “the whole thing became real” at that point. vet“I felt at the time that I didn’t have any marketable skills,” Ervin said, noting that he now realizes his military skills were translatable to civilian life. | The Eagle Post >>

JDog of Stafford, which offers junk removal and hauling services to residential and commercial customers, is owned by retired Marine Al Gourlay. “This was an opportunity for me to invest in my own business and, as it grows, an opportunity to hire veterans,” he said. | Fredericksburg.com >>