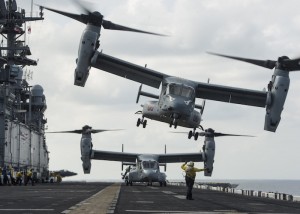 The Senate easily confirmed Dr. David Shulkin as the new Veterans Affairs Secretary on Monday night, making him the first non-veteran ever to serve in the post. Shulkin, who currently serves as the head of VA health programs, was approved by a vote of 100-0. He is expected to be sworn into the Cabinet post on Tuesday. | Military Times >>

A far-reaching federal study hopes to provide new detail for veterans suffering from a traumatic brain injury, or TBI. Early research from the Department of Veterans Affairs shows at least 20 percent of all veterans who fought in Iraq or Afghanistan have suffered a TBI. | WTOP Washington >>

Department of Veterans Affairs is on the cusp of a decision that could have broad repercussions on whether the agency pursues a broad strategy of commercializing its technology core, including its homegrown Vista electronic health record system. | The Business of Federal Technology >>

The Iraqi air force carried out a strike on a house where Islamic State leader Abu Bakr al-Baghdadi was thought to be meeting other commanders, the Iraqi military said on Monday, without making clear whether he had been hit. | Reuters >>

Analysts say the Taliban are placing a new emphasis on symbols as a part of a wider attempt to portray themselves as a modern political force, hoisting their flag to stamp their mark on captured territory and flooding social media with videos designed to recruit and motivate a new generation of Internet-savvy fighters. | Stars & Stripes >>

Iraqi forces have thwarted an attempt by around 200 jihadist fighters to flee their bastion of Tal Afar towards Syria, west of the city of Mosul, a security spokesman said Monday. Forces from the Hashed al-Shaabi (Popular Mobilisation), a paramilitary organisation dominated by Shiite militia groups, said the Islamic State group used tanks in their bid to break out of Tal Afar. | Yahoo News >>

Secretary of Defense Jim Mattis will travel to NATO headquarters for the first time next week, a visit that will be closely monitored by allied nations concerned over President Trump’s commitment to the trans-Atlantic strategic partnership. Mattis will leave DC on Feb. 14 for Brussels, where he will attend his first NATO ministerial. | Defense News >>

The U.S. Army has begun unloading dozens of Chinook, Apache and Black Hawk helicopters at a port in northern Germany so the aircraft can be moved to a base in Bavaria. German news agency dpa reported Sunday that 94 helicopters and several trucks from the 10th Combat Aviation Brigade in Fort Drum, New York were sent to the port of Bremerhaven.  | Military.com >>

It looks and feels a lot like snot, but Navy researchers believe slime produced by the primitive hagfish could help save lives. The bottom-dwelling hagfish is commonly referred to as a slime eel because it looks like an eel and produces a slimy substance that quickly expands in water to enable it to escape from predators by clogging up an attacker’s gills. | Navy Times >>

At this week’s Tampa Bay Startup Week powered by Chase for Business, there’s an entire track dedicated to Veteran Entrepreneurship. It’s an important audience given that there are 400,000 living veterans in the region, according to the Tampa Bay Veterans Alliance. | Tech.co >>

Some see the nearly foot of snow in Schuylerville as an inconvenience but this trio of veterans see it as an opportunity to give back. “We’re just trying to help out the people in need and make sure there’s community support. That’s first and foremost.” Jason Young, Stephen Willette, and Samuel Dickenson have been clearing snow for nearly three years now and they’re doing it for free.  | ABC 10 Albany >>

Jef, a disabled veteran said snow sculpting a good way for him to “get out of the house”. Just in time for Valentine’s Day, Jef’s created a cupid and snowman sculpture at his home on 2617 Clark Street in Stevens Point. He said each sculpture takes around three hours to complete. | CBS 7 Wausau >>