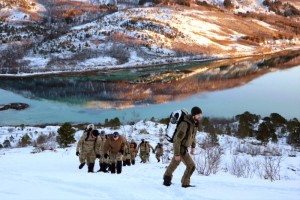 A bill that would give veterans access to mental health care despite a less-than-honorable discharge is back in Congress. Reps. Mike Coffman, a Colorado Republican, and Derek Kilmer, a Washington Democrat, are leading the bipartisan reintroduction of the Veteran Urgent Access to Mental Healthcare Act, Coffman’s office announced Tuesday. | Military.com >>

Three years after at least 35 veterans died waiting for care at the Veterans Affairs hospital in Phoenix, sparking a firestorm of demands for reform across the nation, the facility has been ranked one of the nation’s worst — and whistle-blowers are frustrated. | Fox News >>

Estimates indicate approximately 19 percent of current combat veterans who have received U.S. Department of Veterans Affairs care have been diagnosed with substance abuse or dependence. A recent study in Boston and cited by the U.S. Interagency on the Homeless this year found that drug overdoses “are the leading cause of death among individuals experiencing homelessness in the city.” | The San Diego Union-Tribune >>

The top U.S. commander in Afghanistan says he needs a “few thousand” more troops to properly train and advise the Afghan military. Gen. John Nicholson didn’t provide an exact number while testifying Thursday before a Senate committee. He says the additional forces could come from the U.S. or its allies. | Fox News >>

The vastly different and separate campaigns to drive ISIS out of Raqqa and Mosul will possibly take another six months, said the top U.S. commander in the region. “Within the next six months, I think we’ll see both conclude,” Army Lt. Gen. Stephen Townsend, commander of Combined Joint Task Force-Operation Inherent Resolve, said of the campaigns to take Mosul in northwestern Iraq and Raqqa in northeastern Syria. | Military.com >>

The international Red Cross on Thursday temporarily suspended its activities in Afghanistan following an attack that killed six of its employees the previous day in a northern province. According to Thomas Glass, spokesman for the International Committee of the Red Cross, the aid group’s “activities are on hold” until next Tuesday or possibly longer. | ABC News >>

Immediately after Donald Trump was elected, U.S. diplomats urged Lithuania to rush through an agreement to keep American troops on its soil, reflecting alarm that the new, Russia-friendly U.S. president might try to stop more deployments in Europe. | Reuters >>

The Pentagon says two U.S. airstrikes in Syria killed 11 al-Qaida operatives, including one with ties to Osama bin Laden and other senior al-Qaida leaders. A spokesman, Navy Capt. Jeff Davis, said a single airstrike on Feb. 3 killed 10 operatives in a building used as an al-Qaida meeting site.  | Military.com >>

The Marine Corps’ top aviator is hungry for more F-35Bs, telling reporters on Wednesday that he would like to see the service’s buy rate increase to 37 jets per year. That would almost double the planned rate of F-35B procurement over the next few years, which is projected to sit at 20 aircraft per year from fiscal years 2018 to 2021. | Military Times >>

Zimmerman served as a medic in the Army in the late 1990s and early 2000s. He served in Bosnia, Africa, and the Middle East. Since he came home, he’s struggled with PTSD and depression. It reached a crisis point a few years ago, when his best friend — the guy who had saved his life in a combat zone — killed himself. Zimmerman decided his time was up, too. | NPR >>

He served as a Sergeant in the infantry of the U.S. Marine Corps, and deployed to Afghanistan in 2010 and 2011 in support of Operation Enduring Freedom. He also serves on the Veterans’ Advisory Board of Duquesne University. The film was inspired by two combat wounded veterans’ personal loss and their determination to end a little-known epidemic in America. Their 22 day 6,500-mile cross-country mission was to raise awareness of the high rate of suicide amongst veterans and show their brothers and sisters-at-arms that there is hope for them.  | The Post-Journal >>

Two army veterans on a cross country journey made a stop in Las Cruces Wednesday. Eli Smith and Ernesto Rodriguez are hiking to raise awareness for post traumatic stress disorder. They hiked into the Land of Enchantment Tuesday night and will leave for Deming Thursday morning. | ABC7 Las Cruces >>