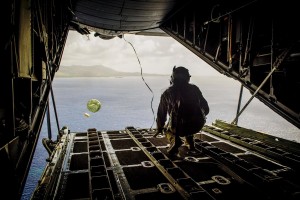 About half of California National Guard soldiers now being forced to repay wartime enlistment bonuses could soon have their debt wiped clean — without any more effort on their part, a top Defense Department official told House lawmakers Wednesday. A preliminary screening of the 1,400 bonuses being recouped in the state indicated about 700 could be forgiven based on existing paperwork, said Peter Levine, who is performing the duties of the undersecretary of defense for personnel and readiness. | Stars And Stripes >>

From the Philippines to Iceland, an increasing number of U.S. military veterans are heading overseas to complete degrees at global universities, thanks to the Post-9/11 GI Bill. Many veterans say appealing aspects of studying at an overseas college include learning another language and receiving cheaper tuition, thanks in part to the exchange rate. | usnews.com >>

The issue of PTSD-related bad paper discharges is not a new one; Congress and military officials have long been aware of the issue. In 2014, then–Defense Secretary Chuck Hagel issued a memo urging all military corrections boards to apply “liberal consideration” to discharge upgrade cases in which the veteran is claiming PTSD. | Vice >>

Iraqi troops who briefly seized a Mosul hospital believed to be used as an Islamic State base were forced to withdraw from the site, but managed to establish a base for army tanks nearby after days of fierce back-and-forth fighting, residents said. | Reuters >>

Calling Afghanistan an ongoing breeding ground for terrorist groups, the chairman of the House Armed Services Committee said he wants American troops to keep U.S. bases open in the still-fragile country into the foreseeable future. Rep. Mac Thornberry, R-Texas, stopped short of calling for permanent U.S. military bases, but he said the threat posed by separatist groups in the region demands some type of presence similar to what American forces left in Germany following World War II. | Military Times >>

Significant Islamic State group counterattacks in southeastern Mosul inflicted heavy losses on Iraqi forces overnight after a new push deeper into the city this week, according to an Iraqi Army officer. Despite the counterattacks, the fresh Iraqi push appears to have relieved pressure on Iraq’s special forces who have been largely leading the fight inside the city on the eastern front. Wednesday afternoon, the special forces announced new gains. | Military Times >>

The Navy’s newest and most technologically advanced surface ship, the guided-missile destroyer USS Zumwalt, is scheduled to arrive in San Diego today. The arrival will come a little more than two weeks after the $4.4 billion ship’s propulsion system broke down in the Panama Canal. The 610-foot- long vessel had to pull into port in Panama to make repairs before continuing the voyage to San Diego, which will serve as its home port. | CW6 San Diego >>

At Fort Benning, Georgia, the Army for the first time Thursday held a graduation for the Armor Basic Officer Leader Course that included female Soldiers among the graduates. “It’s a great day,” said Maj. Gen. Eric Wesley, commanding general of the Army Maneuver Center of Excellence, during a press conference in advance of the graduation. “You’re going to see today 65 great armor lieutenants walk across the stage as graduates of the ABOLC.” | Fort Hood Sentinel >>

Members of the community gathered at San Angelo Mathis Field Airport to welcome 24 wounded veterans from across the country. “We have actually have eight of them from Texas this year, which is the biggest we’ve ever had from Texas,” says founder, Chris Gill. “We’ve got some from Kentucky, Oregon, Washington, Ohio, they’re just coming from everywhere.” | conchovalleyhomepage.com >>

Eli Smith, an U.S. Army veteran, sold his truck and most of his personal belongings in Ohio to begin his 13,000-mile journey two weeks ago to raise awareness for military veterans struggling with post traumatic stress disorder. “I was tired of seeing my friends kill themselves,” said Smith as he sat in the Port Barre McDonald’s on Tuesday afternoon after walking more than 30 miles in the morning. | DailyWorld >>

Arthur Woodson and George Grundy II journeyed more than 18 hours from their home in Flint, Michigan, to the protests at Standing Rock in North Dakota by car, hoping to help protect the water on the reservation where the the Sioux Native American tribe lives. When they returned, crossing six states to get there, they brought with them a renewed focus on the battle to protect their own water supply in Flint, as well as a commitment from other veterans to join the fight. “I had a beautiful experience and met beautiful people out there,” Grundy, a Marine Corps veteran who served in Afghanistan, told ABC News about his experience joining the protests at Standing Rock.| ABC7.com >>