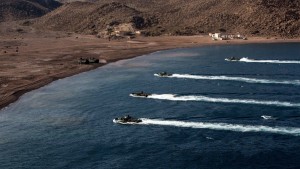 The Department of Veterans Affairs has for years assigned star ratings for each of its medical centers based on the quality of care and service they provide, but the agency has repeatedly refused to make them public, saying they are meant for internal use only.| USA Today >>

The U.S. Army’s efforts to come to grips with a dramatic upsurge in war-related behavioral conditions over the past 13 years holds valuable lessons for bringing precision mental health care to the civilian world. | Harvard Business Review >>

The California National Guard commander who led a five-year push to claw back improper enlistment bonuses from thousands of soldiers will urge Congress on Wednesday to let many of them keep the money, according to his prepared testimony.| The Los Angeles Times >>

Significant Islamic State group counterattacks in southeastern Mosul inflicted heavy losses on Iraqi forces overnight after a new push deeper into the city this week, according to an Iraqi Army officer. | The Seattle Times >>

From a childhood as a refugee, Capt. Safia Ferozi is now flying a transport plane for Afghanistan’s air force as the country’s second female pilot, a sign of the efforts to bring more women into the armed forces. | NBC News >>

As Iraqi security forces wage a grinding house-to-house battle to push the Islamic State out of Mosul, the U.N. High Commissioner for Refugees (UNHCR) is rushing to prepare for a potential mass exodus of up to 700,000 mainly Sunni civilians | The Chicago Tribune >>

So it doesn’t seem that the Army or the Marine Corps are in any hurry to explain to Congress why they don’t use a common 5.56mm round. | Military.com >>

Crews were racing to find a U.S. Marine Corps pilot who ejected before his F/A-18 crashed off Japan, the Pentagon confirmed. | Fox News >>

Remembrances of Japan’s Dec. 7, 1941, attack on Oahu usually focus on the immense destruction wrought upon the Navy in Pearl Harbor. But the Army suffered losses, too, and mounted a counterattack with the few fighter planes that were left airworthy. | Stars and Stripes >>

Disabled veterans, who may not be able to hunt otherwise, have the chance to in Lancaster County this week. | Fox43.com >>