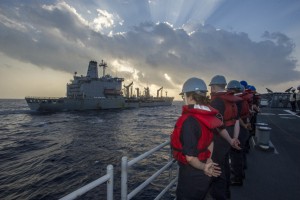 The study examined the records of 2,187 Iraq and Afghanistan veterans with epilepsy receiving VA care in 2010 and 2011. Over the next five years, these veterans with epilepsy were much more likely to have died than similar veterans without epilepsy. This is true even when researchers took into account other issues veterans had such as cardiac disease and cancer. | San-Antonio Express News >>

The Pentagon has buried an internal study that exposed $125 billion in administrative waste in its business operations amid fears Congress would use the findings as an excuse to slash the defense budget, according to interviews and confidential memos obtained by The Washington Post. | The Washington Post >>

As it stands now, family members of Guardsmen and Reservists killed during inactive training receive a much smaller monthly payment than those of active-duty members. For example, a survivor receives $1,036 a month if the spouse was killed on inactive training status, yet another receives $3,381 if the spouse was killed on active duty, according to a fact sheet from the Defense Department. | Military.com >>

It’s a bright autumn day, and a group of teenage girls are walking down a bustling street in this religiously conservative city in western Afghanistan, near the Iranian border. Giggling and gossiping, they clutch black cloaks tight about their faces as they arrive at a nondescript villa. | Yahoo >>

Iraq—The Obama administration is trying to preserve the fragile alliance between the Kurdish fighters and Iraq’s military that has made significant battlefield gains against Islamic State in Mosul but is now threatened by a budget battle in parliament and uncertainty over the policies of the incoming Trump administration. | The Wall Street Journal >>

An announcement on the service is expected after a meeting between Afghan President Ashraf Ghani and Indian Prime Minister Narendra Modi on Sunday in the northern Indian city of Amritsar, a short distance from the Pakistan border. The two leaders are attending the Heart of Asia conference aimed at stabilizing Afghanistan. | Reuters >>

The Senate is expected to vote this week on a defense bill that requires the Defense Department to submit a side-by-side comparison of the 1970s-era Thunderbolt II and the F-35 Joint Strike Fighter, which is slated to take over many U.S. tactical air power roles including the close-air support that made the A-10 beloved among infantry troops. | Stars and Stripes >>

In conference to iron out differences between the House and Senate versions of the defense authorization bill, lawmakers tentatively agreed to cap the Aviator Retention Pay bonus at $35,000 for each year pilots agree to stay with the Air Force, according to the conference report released Nov. 30. This means they could receive up to $315,000 for a maximum nine-year contract. | Air Force Times >>

Chance Huffman has been walking since November 16. The Waco-native and Army veteran stopped at a Lubbock hotel to catch a break over the weekend. Huffman is on a mission, he’s hiking over 2,000 miles from his Waco hometown to Portland, OR to shed light on veterans’ issues. | Everything Lubbock >>

They’re wounded warriors, and Juan is helping get back in the game. “I’m trying to get them to understand that they can still do these things, ” said Arredondo. Juan said he knows all too well the struggle of losing limb. In 2005, an IED hit Juan’s patrol vehicle during his first and only tour in Iraq. Juan’s arm was blown off, and he almost lost both legs and his other arm. | KENS >>

The show is called “Left Out,” and is a collaboration between husband-and-wife team Carlos Thompson and Morgan Carlisle. Carlisle is board chair at Eyedrum, and Thompson is a writer and veteran of the U.S. Army, with tours in Afghanistan and Haiti under his belt. | WABE >>