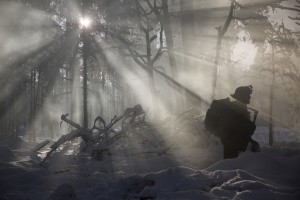 Nearly 600 veterans learned this week that they could have hepatitis B, hepatitis C or HIV because a Department of Veterans Affairs dentist did not correctly disinfect his equipment over a one-year period, according to a VA statement. | Military.com >>

“What they want is leadership. They want somebody to set the right tone, to understand the mission, and let nothing get in their way. Unfortunately, over the last several decades, it just hasn’t been that way. I’m not talking just about the secretaries personally, I’m talking about leadership all the way at the top” in the White House. | Military Times >>

In a press release published Sunday, the United Nations Assistance Mission for Iraq, or UNAMI, said it “acknowledges that the military figures were largely unverified.” The agency said it will discontinue the reporting “unless a sound methodology of verification can be found to better substantiate the figures being reported.” | UPI >>

Since the international coalition ended its combat mission in 2014 and assumed a more advisory role, security in Afghanistan has deteriorated markedly. In the past year, the rise of self-declared Isis franchises in the east of the country has caused some US officials to worry that Afghanistan may again become a terrorist haven. | The Guardian >>

The Iraqi government sent truckloads of food, heating oil and drinking water to residents in areas retaken from the Islamic State group in and around Mosul after aid groups warned of shortages in Iraq’s second largest city, which has been the target of a major offensive since October. | Military Times >>

The 81st Brigade, which until recently was an armored brigade combat team, is headquartered in Washington state and has units in Oregon and California. Under the new partnership, the Guard soldiers will train at Joint Base Lewis-McChord, Washington, including to learn how to operate their new vehicles, according to officials from the Guard and the 7th Infantry Division. | ArmyTimes >>

“To decrease the strike fighter shortfall and to best prepare future air wings for likely threats we will soon divest from legacy Hornets, look to buy several squadrons worth of Super Hornets and continue with efforts to bring on the F-35 carrier variant,” said the official. | Reuters >>

The Army said Sunday that it will not approve an easement necessary to permit the controversial Dakota Access Pipeline to cross under Lake Oahe in North Dakota, marking a monumental victory for the Native American tribes and thousands of others who have flocked in recent months to protest the oil pipeline. | The Washington Post >>

“What we do is unique. It’s based on body mind and spirit,” Languerand said, while stroking the nose of a tall Morgan and Clydesdale mix in the chilly morning air Friday. How people communicate with horses is different, but not as different as one might think, she explained. | The Bristol Press >>

“I loved it so much,” said Binder, who put off college and worked full time at Lincoln’s Challenge Academy while serving in the Guard. Her first overseas deployment was in Iraq in 2006, where she had various jobs in a military prison. She came home in October 2007, but she and three fellow guardsmen found it hard to be home and decided to go back. They left for Afghanistan less than a year later. Binder was stationed at Camp Phoenix near Kabul, and soon after, one of her three friends was killed. | Northwest Herald >>

Carter, a retired Army captain, would explain to retired 1st Sgt. Arthur Davis that his court was different, that veterans got a fair shake here. That everything he might need – drug treatment, psychological therapy, housing assistance, employment assistance, a second chance – was available. He just had to want them. | Houston Chronicle >>