In celebration of the Holiday season, the IAVA Daily News Brief will go dark between December 24th & January 8th, but will be back January 9th! 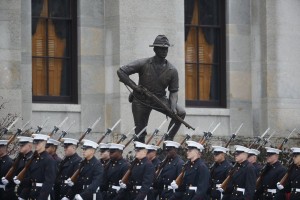 Marines arrive to escort the casket of John Glenn out of the Ohio Statehouse during his funeral procession, Saturday, Dec. 17, 2016, in Columbus, Ohio. John Minchillo/AP | Military Times >>

“I think he’d be viewed very favorably,” Paul Rieckhoff, executive director of Iraq and Afghanistan Veterans of America, told POLITICO. “He is definitely the most qualified of the people they have put out there.” | POLITICO >>

At Mar-a-Lago, Trump’s palatial Florida estate, was slated to meet with Luis Quinonez, who runs a company with military and health care ties and is said to be under consideration for VA secretary. He also is set to meet with Toby Cosgrove, the CEO of the Cleveland Clinic, who was a top contender to replace Eric Shinseki when he resigned at the VA in 2014. Cosgrove later withdrew from consideration. | Military Times >>

“My brain wasn’t able to shut off. It was going a million miles a minute. You need it on a deployment. But it’s not normal at home,” said Macie, whose job as a forward observer for artillery strikes meant his mind would never stop processing where he and fellow soldiers were at all times. | Military.com >>

Taliban spokesman Zabihullah Mujahid said earlier this week that their two conditions for peace talks are the removal of the group leader’s name from the U.N. blacklist and the withdrawal of all foreign forces from Afghanistan. | Stars and Stripes >>

“Residents said (IS) members told them in person, by radio, and over mosque loudspeakers that those who stayed behind were ‘unbelievers’ and therefore valid targets along with the Iraqi and coalition forces,” the rights group said. | Yahoo >>

The incident underlined the fragile security situation in Kabul, which has seen repeated attacks by suicide bombers and gunmen in recent months. Helmand, one of the strongholds of the Taliban and source of much of the world’s opium, has fallen increasingly under insurgent control over the past two years. | Reuters >>

In September, the Navy had said it would shelve hundreds of years of tradition and follow the practice of the other armed services which call enlisted servicemembers by their rank, such as petty officer or sergeant. The Navy has long used more specific titles such as “corpsman” and “chief yeoman,” which are steeped in tradition but difficult for the public to translate or understand. | Fox News >>

“The incident was inconsistent with both international law and standards of professionalism for conduct between navies at sea,” said Peter Cook, a Defense Department spokesman. | Business Insider >>

December is the month when you’re supposed to be getting out of shape. But if you plan to either join the Army or reclassify from a “soft” military occupational specialty, like water treatment specialist, to a more physically demanding job, like infantryman, in 2017, you’d better skip the eggnog and reach for the dumbells instead. Because on Jan. 1, the Army is rolling out its all new, top-of-the-line occupational physical assessment test. The OPAT will help determine whether you’ve got what it takes, in your muscles and in your heart and in your balls, to serve on the front lines in the deadliest game known to man: War. | Task & Purpose >>

“These families are so used to doing whatever it takes to get by and not really having any assistance from anyone who truly wants to help,” Mandile said. “That’s all we want to do: We want to be able to put gifts in these people’s houses so their moms can sit back and watch their kids smile all morning. So they can have that bit of normalcy in their live that they’re missing.” | Metro >>

Today, Garcia is one of the most influential people on the growing social media platform. As of the publication of this article, Garcia’s three Instagram accounts alone have more than 6 million followers and get more than 30 million impressions a week. But before he had millions of followers, and before he joined the military, Luis Garcia (or @lawofambition on Instagram) needed to find a way out of his north Philadelphia neighborhood. | Forbes >>

In the barn, U.S. Army veteran Trecia Rodgers prepares for the class to start. The 49-year-old Victoria woman credits this kind of therapy with helping her turn her life around after she returned home two years ago from Afghanistan. | Military.com >>