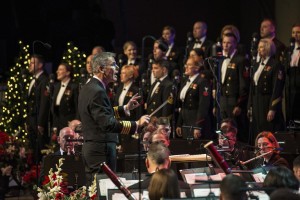 The move comes amid growing demand on the service but also scrutiny over its operations. The round-the-clock hotline has fielded more than 2.6 million calls and intervened with emergency services more than 67,000 times in the program’s nine-year history, and department leaders are hailing the expansion as a critical need. | Military Times >>

The incoming president is “not inclined” to keep the department’s current secretary Bob McDonald in his administration, a senior transition official told CNN on Monday. Instead, Trump is considering several potential successors who would align more with the sweeping VA overhaul Trump championed on the campaign trail as he railed against what he called the “most corrupt” and “most incompetently run agency in the United States.” | CNN >>

The VA position is one of the last remaining slots in the Trump Cabinet for which the president-elect has not yet announced a nominee. The department has been reeling in recent years from the controversy involving falsified patient wait-times and other scandals. Trump has vowed to reform the department. | Fox News >>

“We have waited since 2012 for somebody to understand our problems,” she said, appearing to read from a script, while her husband sat next to her with their children rested on his lap. “We can only ask and pray that somebody will recognize the atrocities these men carry out against us as so-called retaliation in their ingratitude and hypocrisy.” | The Guardian >>

Hundreds of much-criticized checkpoints have for years dotted Baghdad as authorities struggled to establish security. Criticism escalated after the July 3 massive suicide bombing that killed almost 300 people, the deadliest single attack in the Iraqi capital in 13 years of war. That attack forced the government to ban the use of a bogus hand-held bogus device supposed to detect bombs at checkpoints. | The Salt Lake Tribune >>

Since 2002, the international community has spent some $100 billion on rebuilding the country and its economy. Nearly 70 percent of Afghanistan’s annual income is from international donors. Washington itself “is by far the largest spender on the Afghan armed forces and government. Without U.S. financial support, it is difficult to imagine the state, in its current form, surviving,” said Thomas Ruttig, the co-founder of the Afghanistan Analysts Network, an independent, non-profit think tank. | Defense One >>

President-elect Donald J. Trump plans to nominate Vincent Viola, the billionaire founder of a high-frequency trading company, as secretary of the Army, the Trump transition office said. Mr. Viola, a retired Army major and graduate of West Point, is the owner of the National Hockey League’s Florida Panthers, former chairman of the New York Mercantile Exchange and founder of Virtu Financial. | The New York Times >>

Mild TBI was the signature wound of the wars in Iraq and Afghanistan, affecting more than 200,000 troops. Having data from blast sensors could play “a very, very important role in helping us understand why an individual has negative effects from a concussion,” Chiarelli says, “or why an individual develops one of the neurodegenerative diseases that seem connected with concussion, everything from ALS, to Parkinson’s to dementia and even Alzheimer’s.” | NPR >>

“One of the reasons we were doing that test was because of congressional language from last year that said ‘you two services need to look at getting to a common round,’ so we heard Congress loud and clear last year,” Col. Michael Manning, program manager for the Marine Corps Infantry Weapon Systems, told Military.com in a Dec. 15 Interview. | Military.com >>

In 2016 an additional $1.98 million in funding was added to the National Endowment for the Arts budget to support the Creative Forces NEA Military Healing Arts program. In 2017 it will expand and five art therapy sites will be added to the seven currently scattered across the country. The program is a partnership between the NEA and the Department of Defense and it puts creative arts therapy at the center of the patient-focused treatment for veterans, military members and their families. | Fox News >>

“We’re starting off with eight veteran-led start-up teams. Those teams will learn how to not make critical mistakes that they can’t recover from, but more importantly, to get product services and technologies out into the market,” said Potter, who founded the Armory Incubator. | KTAR >>

“To come on campus in your mid-20s after having served, having nothing in common with your peers, it tends to generate feelings of separation,” Bechtol said. Even beyond considerations of post-traumatic stress and other mental health issues, “there’s often just this sense of loneliness, a feeling of being disconnected from their classmates.” | Military Times >>