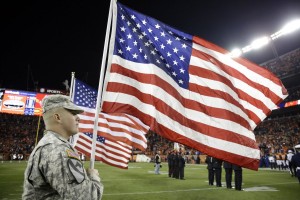 “This could be the most dramatic shake-up at VA in history, and I think that’s what we’re bracing for and we’re preparing for,” said Paul Rieckhoff, chief executive of Iraq and Afghanistan Veterans of America, a more moderate voice for younger veterans. | The Washington Post >>

President-elect Trump’s transition officials have scheduled a “listening session” for Thursday with veterans advocates, including the American Legion and other groups. It’s playing out following big promises by Trump to overhaul the workings of veterans care in the U.S. and continuing discussion about his potential appointment to run the Department of Veterans Affairs. | NPR >>

“Our mission is to go and ask and offer if we can help and support the tribes that are already there,” the Coast Guard veteran said. “Obviously there could be groups that say some negative things, but we’re going to march forward without them.” | ABC News >>

The plunge began just months after ISIS militants swept across large parts of northern and western Iraq. They seized territory that prompted a huge effort to rebuild and rearm large segments of the military and security forces and to care for a flood of people displaced from their homes. | Military Times >>

Life has not been easy for Paradise Sorouri. In the past seven years, the 27-year-old has been forced to flee her country twice, received more death threats than she can count, and was brutally beaten by 10 men on the street and left to die. Her crime? She covers her head with a baseball cap instead of a hijab, raises her voice for women’s rights, and is Afghanistan’s first female rapper. | The Guardian >>

The Iraqi commander at the base, near the town of Balad, asked the militiamen to leave. But the men ignored him as well as orders from the central government in Baghdad, according to two army officers in the Salahuddin Operation Command, the regional military headquarters. | Reuters >>

An Army review concludes that commanders did nothing wrong when they kicked out more than 22,000 soldiers for misconduct after they came back from Iraq or Afghanistan – even though all of those troops had been diagnosed with mental health problems or brain injuries. | NPR >>

The fiscal 2017 National Defense Authorization Act would allow the service to grow from 182,000 to 185,000, even as it reorganizes the top leadership structure. The 3,000 additional troops would represent the first plus-up in years for the Marine Corps, which has been tasked with drawing down from a wartime high of 202,000 since 2011, and would return the service to a pre-war end strength. | Military.com >>

The USS Zumwalt, a stealth ship commissioned in October and costing upward of $4.4 billion, has already had engineering and propulsion problems and experienced a breakdown last week when it passed through a portion of the Panama Canal. It was delivered about two years late and despite its stealthy qualities is seen by some as vulnerable and no longer suitable for the missions it was designed to handle. | CNBC >>

Niosh is one of thousands of dogs that are bred by the Santa Rosa-based nonprofit Canine Companions for the sole purpose of enhancing the lives of people with disabilities. The nonprofit breeds, trains and then pairs the service dogs with the candidate. In a sense, Niosh was born to give Wight a better life. | Monterey County Weekly >>

“Diving with my son Marcus has been a great opportunity for us to connect on a level that we hadn’t had an opportunity to in the past. When we started diving it opened up a whole new world for us. It’s an opportunity for us to do something that we can share together, that we can develop together because we trust each other more and we understand the necessity that we take care of each other while we’re diving and what being a dive buddy is about. It’s given us a lot more opportunity to strengthen our relationship. It’s something that I’m very, very grateful for.” | Deeper Blue >>

On June 11, 2007, Sgt. 1st Class Antonio Gonzalez and Sgt. 1st Class Mark Roland, both Green Berets with Special Forces Operational Detachment 732, were on a routine patrol with their team in Uruzgan, Afghanistan, when a nearby element of Afghan security forces came under intense fire. The men had just taken tactical pause for chow. Now, the MREs would have to wait. | Task and Purpose >>